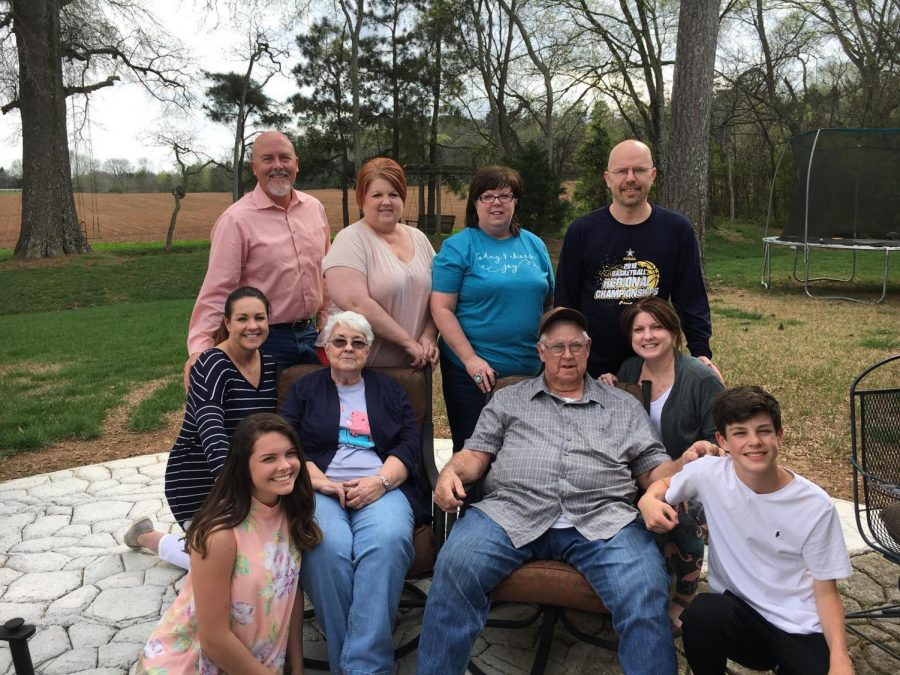 Journalism teacher Erin Coggins and her family pose for one of the last family events the Cartee family held with their Dad.

Over a year and a half ago, the pandemic was officially declared in March 2020. As it drags on, COVID continues to take a toll on its victims.

Junior David Renfrow and Rileigh Glassman experienced mild cases of COVID in July 2020 and August 2021. Their bodies recovered within a couple of weeks while history and journalism teacher Erin Coggins struggled with a more permanent consequence. Rather than losing taste or smell, she lost her dad.

”My oldest sister lives with my parents. She came down with COVID on Dec. 18. My parents caught the virus just before Christmas. My sister had chills as her first symptoms. My Mom sounded like she had a terrible head cold. My Dad struggled to breathe,” Coggins said. “My Mom actually tested positive and my Dad negative the day after Christmas. We called the ambulance for my Dad on Dec. 30. He tested positive at the hospital and never came home.”

Personally struggling with the physical symptoms, Renfrow was concerned for his family’s health when he discovered he contracted the virus. After quarantining, he is thankful they never got it from him.

”I started by feeling really fatigued and achy. Once I couldn’t taste or smell anything, it appeared to be the virus,” Renfrow said. ”The virus affected me much like a common cold, but it was slightly worse.”

Glassman thinks she got it from her brother since he was sick a day or two before she showed any symptoms. Spreading throughout the household, her stepdad got it as well. At the time, they were not sure it was COVID.

“I woke up late for school on a Thursday morning feeling dizzy. I started a hot shower to get ready for the day and got light-headed,” Glassman said. ”I stopped getting ready for school and told my mom that something didn’t feel right. She suggested that I stay home for the day and I did, hoping to get some of my work done.”

COVID symptoms span across a spectrum. For Glassman, they began as minor and discrete. For Coggins’s family, the signs were more telling and worrisome.

“As soon as I learned my sister had COVID, I panicked. My Dad had underlying symptoms and had battled with some medical issues the year prior,” Coggins said. “I knew if he caught the virus that the outcome could be bad. Dad was sick for less than a month. He was tired though, and that made it tough for him to fight the way he needed to fight to beat it.”

Renfrow had minor symptoms, the most prominent was exhaustion. It was not a walk in the park, but according to Renfrow it “wasn’t terribly bad” either.

Getting a mild case of the virus made me really thankful for the great health I had and minimal illness I felt,” Renfrow said. “Not being able to taste or smell anything was very strange. I kind of lost my appetite after I realized how weird some food textures were.”

Renfrow and Glassman had COVID a year apart, yet the symptoms were just as real. Glassman felt feverish and struggled with the loss of taste and smell because it was a symptom she never experienced before.

“My symptoms were bad but not as bad as others. It was definitely different compared to any other illnesses I’ve had,” Glassman said. “Losing my taste and smell was disappointing because I was in bed the majority of the time so I would look forward to eating. I lost my appetite because of not being able to taste, so eating wasn’t enjoyable.”

Losing her appetite was the least of Coggins’s worries. On Dec. 30, her dad stayed in the emergency room for three nights as they waited for an available room. Her dad was in a room for two nights before they moved him to the ICU. Once on the ventilator, his kidneys began to fail, his blood pressure plummeted and eventually, the machine was breathing for him.

“One day in the ICU and they called my Mom to have him put on a ventilator. She decided to take him off the ventilator on Jan. 13,” Coggins said. “It was a Saturday and we all were present to say our last goodbyes. My mom got to go in and hold his hand until he took his last breath. I stayed outside to give her support. She had previously had COVID so she could enter more safely than I could. My mom truly believes that if she had been able to truly be with him that the outcome may have been different.””

It was difficult for Coggins to not be with her family when they needed each other the most. It was particularly difficult because it occurred around the supposed happiest time of year—Christmas.

“We did not get to do our annual Christmas gathering and now I will never have the opportunity to be with my Dad on Christmas, again. He loved Christmas,” Coggins said. “Not being able to be in the hospital when he was dying was the most difficult part of having to quarantine him. I have had to really strengthen my relationship with God to try and understand grief. I finally understood the meaning behind people saying “‘it’s okay to not be okay.’”

People who have experienced the virus struggled because of the mental isolation that comes with it rather than the physical symptoms. Renfrow started his sophomore year virtually and struggled with loneliness.

“Getting COVID made me feel bad because band camp was going on at the time and my section had to quarantine as a result; although, it made me feel better that none of them got it,” Renfrow said. “[Virtual school] made me miss being in a physical school and miss friends around me. I became a bit more social as a result.”

The pandemic has touched every part of Coggins’s life. As a teacher, she fears it has diminished any hope of students having a normal high school experience. Granted with the extra time on her hands during quarantine, she found a new hobby.

“I feel that so much has been affected, including the students in our school. This stresses me out because I feel that remote learning took away so much valuable time from them,” Coggins said. “On the positive side, I got into jigsaw puzzles. Putting them together seems to calm me somehow.”

Glassman was lonely when she first started quarantining because she was home alone and had to stay in her room. After she started feeling better, she spent her time off with her family.

“I felt alone and left out because I saw all of my friends hanging out on social media and I missed going to school,” Glassman said. “Not only that but my parents were at work and my younger brother was at school. Once I was getting better, my stepdad was feeling sick so I saw him more.”

Thanks to the pandemic, Coggins lost the luxury of spending extra intentional time with her dad. To be responsible during the pandemic, they only held a family service of fewer than 10 people for the funeral.

“I lost my Dad. It is a club that you do not want to ever be in. It hurts. I miss him constantly,” Coggins said. “Dad would have loved a crowd. Everyone that met him liked him. He was a giving, kindhearted and hardworking man. It makes me mad to see how cavalier some people are about this virus. It is nothing to ignore.”

It is frustrating for Coggins to have experienced loss due to COVID while others recovered quickly without a second thought. For Renfrow, masks are seemingly ineffective as a mode of prevention, especially in the school setting.

“The vaccine is a better solution for school systems,” Renfrow said. “Masks are just annoying and many people wear them improperly as a result, especially in high school, which makes them useless. Social distancing can help but it hurts the experience of school.”

News reports have started that if people would wear their masks properly, they would not be rendered useless. Glassman was cautious before she got COVID, and after getting it, that had not changed. She grew more cautious in hopes to protect her family and herself from contracting it again.

“I am still wearing my mask, social distancing, washing my hands, and taking the precautions needed,” Glassman said. “I think Covid is still very real and people need to continue to do their best at protecting themselves and the people around them.”

People who directly felt the impact of COVID feel that every precaution should be taken seriously. Coggins wishes people would be more considerate and stay safe to keep others safe, especially those at high risk.

“Losing my Dad to this pandemic causes me to feel anger. I’m angry that this entire virus was not taken seriously in the early stages,” Coggins said. “Why my Dad? He would have been vaccinated immediately if the vaccine had been available. That’s why seeing all the opposition to vaccines and masks makes me angry at times.”

Coggins has seen ignorance and negligence end lives. According to news reports, the number of COVID deaths spiral with 600,000 plus people falling victim to the contagious killer. That is the Bryant Denny Stadium filled to capacity six times. Her personal experience may be more traumatic than others, but it is just as real. She holds a strong stance regarding COVID precautions.

“I am pro-masks and pro-vaccine. We need to do all we can to combat this virus and get out of this pandemic,” Coggins said. “Do I like wearing a mask? No, but it is my duty to others to follow the guidelines our medical experts have outlined for us. A mask is a better alternative than being intubated in the hospital. Needles are not my favorite, but two sticks for the vaccine are better than hundreds of needles one gets while being treated in a hospital. I also know that we must continue on with life. We can’t just stop, so we need to take these precautions.”