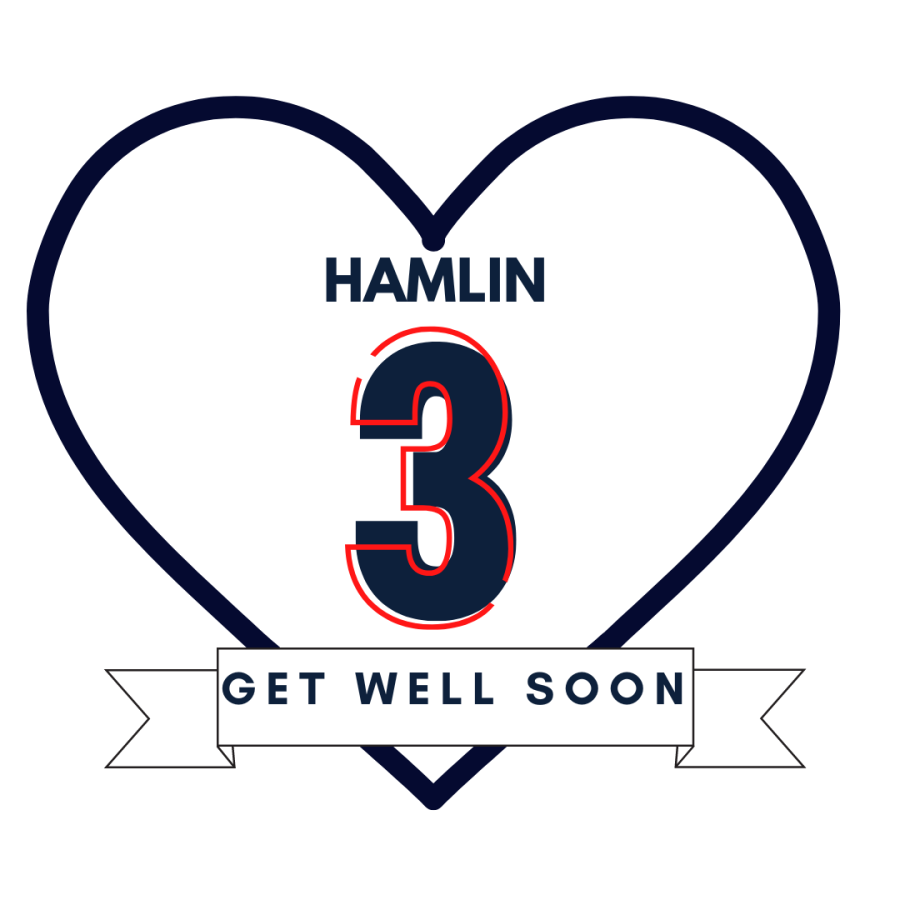 Senior Shares Concerns About Recent Health Scares In The NFL

Sudden silence. Time stops in week 17 of the NFL as those around the game were reminded of the potential dangers for football athletes.

The week 17 matchup between the Cincinnati Bengals and the Buffalo Bills was postponed indefinitely Monday night after Bills safety Damar Hamlin suffered a cardiac arrest during the game. Hamlin collapsed in the first quarter after standing up from a routine tackle on Bengals wide receiver Tee Higgins. CPR was administered to Hamlin on the field and his heartbeat was revived before he was transported to the hospital.

Hamlin was transported to the University of Cincinnati Medical Center, where he was placed in critical condition. Hamlin remained in the intensive care unit as his neurological function and physical condition improved. Updates of his condition have been given throughout the week and the first piece of direct contact from Hamlin since his injury came on Saturday from Hamlin’s Instagram. He has since posted more on his Instagram, including posts of him supporting his team in their week 18 game against the New England Patriots. Hamlin was released from the Cincinnati medical facility on Monday and has been allowed to travel back to Buffalo, where he is being treated by a team from Buffalo hospital.

Hamlin’s injury has since awakened the NFL of the importance of safety and support for the athletes and support has poured out for Hamlin from both within and outside the NFL community. An example of this has been the wave of people contributing to “The Chasing M’s Foundation.” This charity, set up by Damar Hamlin while he was in college, has received over 200,000 donors since the incident, which has amassed over $7 million. Teams around the league have also joined together to show their support for Hamlin. There have been many examples of opposing teams joining for a pregame prayer in week 18 and all of the Bills players had Hamlin’s number three on their jerseys for their game.

This incident has brought increased attention to many in the league of the potential dangers in football. While the most widespread, this incident is not the only event this season that has brought attention to players’ health and safety. Miami Dolphins quarterback Tua Tagovailoa has been a subject of concern as he has struggled with concussions this season. Tagovailoa has displayed concussion-like symptoms multiple times this season, which has caused many around the game to question the safety of the NFL’s concussion protocol. This season, athletes have increased their concerns about the safety of the game and protection for the league’s players. This has been a concurring issue in the NFL and has continued to be a topic of concern for athletes and the NFLPA. Team organizations have also been pointed to provide regular access to mental health professionals for their players and staff.

The story of Damar Hamlin and his injury has drawn attention from people around the country, regardless of their interest in football. And their thoughts and prayers remain as he continues to recover.