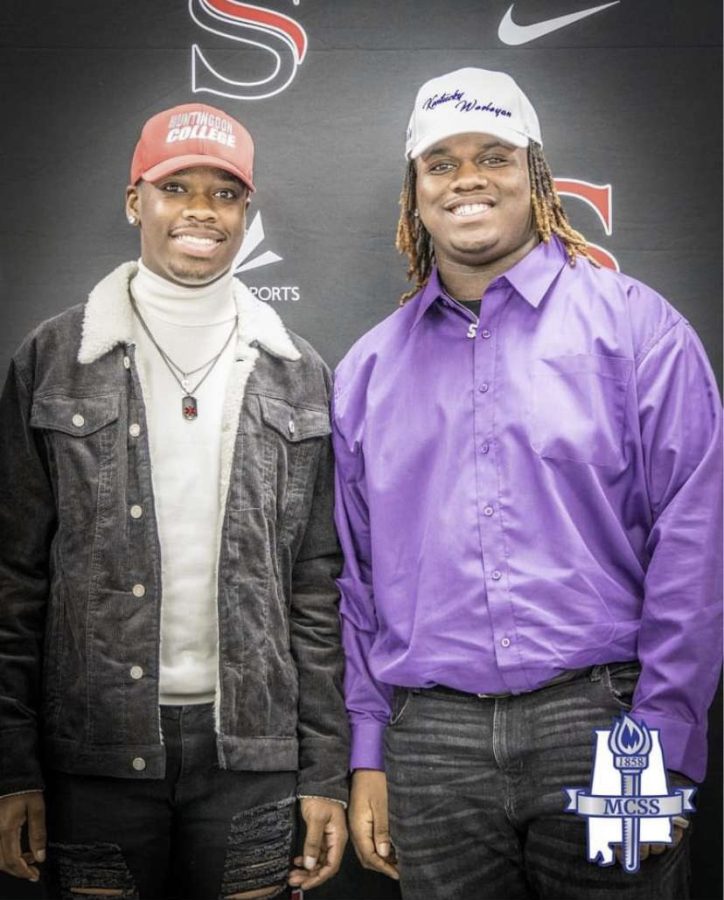 Senior Brothers Reflect On Their Time Spent Playing Football Together

Seniors Terrell and Terrant Young have been playing football together since they were six. Now the boys are heading down two different paths after signing scholarships with Huntingdon and Kentucky Wesleyan College.

“It feels good but it is kind of heartbreaking at the same time because we’ve been playing since we were little kids, literally our first day of practice to our last day of practice at Sparkman,” Terrant said.

The boys signed their scholarships on Feb. 2 in the school auditorium to the colleges of their choosing. Together they have grown and watched each other better themselves on and off the field. At a young age, the boys fell in love with the sport. Their father used to coach the football team at Huntsville High so the boys grew up around football most of their life.

For Terrell, signing a scholarship to continue almost did not happen. During the third season of the game, Terrell suffered a severe injury to his spleen, costing him the rest of the season. Despite his doubts of not returning to the field, he put his faith and trust in God. Even though Terrell missed out on games, he continues to work hard and push himself.

“Stay in shape, continue to pray and trust God, work on my mental and physical health and continue to believe I can be the same player I was before I got hurt,” Terrell said.

During the season, Terrant injured his wrist but was able to continue playing. He said he was determined to keep playing and help the team out as much as he could. Trying to make the most of his last year, as a result of his effort Terrant received scholarship offers to UT Martin, Kentucky Weslyan Tuskegee and Bluefield State. Terrant chose Kentucky Wesleyan because he believes he can develop his skills and a place he can call home for the next few years.

“I will continue to better myself by staying humble, staying out of trouble, and staying in my books at college and working on my career everyday,” Terrant said. “While I’m in college,  I will hit the weight room harder and just go hard with everything I do for the next four years while I’m at Kentucky Wesleyan.”

Even though the season did not go the way the boys anticipated with the team not making it past the first round of playoffs, Terrell suffering an injury to his spleen and most of the guys were out because of injuries the team still made great memories with each other from the beginning up until the end of the season.

“Last season playing for Sparkman was very fun actually. Every Time I got to hang out with those guys it was the best part of my day. They made my high school experience for the past four years something very special,” Terrant said.