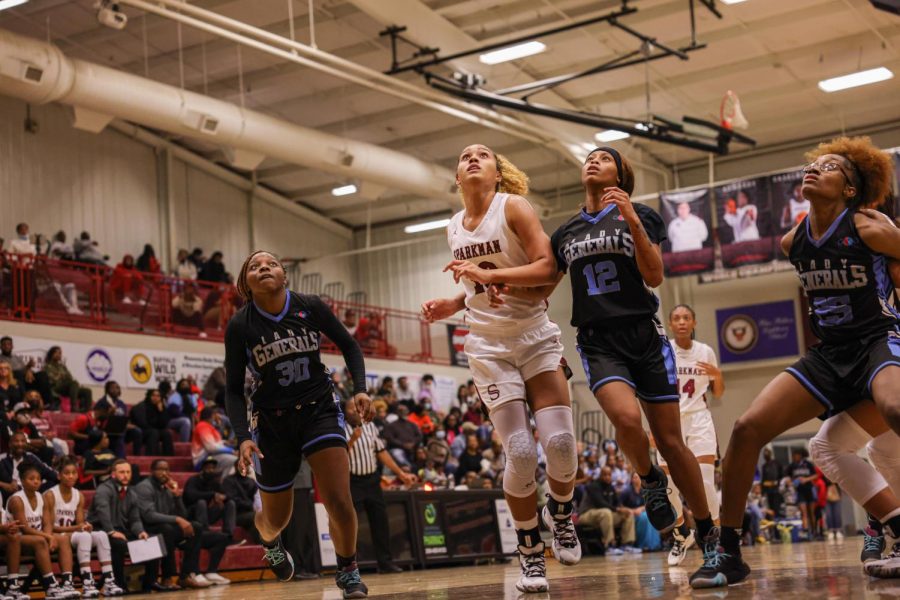 Blocking out, sophomore Jalei O’Neal prepares to bounce on the rebound.

Crimson Crier: How have you been feeling about the season so far?

Jalei O’Neal: I’m feeling really good about the season so far. I think we have a lot more to come and that we haven’t shown our full potential to everyone yet.

CC: Have you had any worries or frustrations?

O’Neal: Not a lot of worries. Frustrations will always be there with not making shots or if the other teams are scoring. You just gotta keep a strong mindset and keep going because the game doesn’t stop.

CC: Do you plan on continuing to do basketball after high school?

O’Neal: I don’t really know what my plans are for my future in basketball. If I get the opportunity to play further then that is great and if it’s not in the cards for me, then there’s always something else. But I really do love the game and it will always be a big passion of mine.

CC: What does it take to be a basketball player?

O’Neal: I think for everyone it’s different but having a strong mindset to get through adversity is a big thing and being a good communicator and teammate is also really important. You have to be able to work with other people who may have different skill sets than you and be able to push each other and hold each other accountable at all times. It’s like one big extended family. You have the good times and the bad.

CC: Describe some things you incorporate into your daily routine to help you stay motivated and energized.

O’Neal: I don’t know if I really incorporate things to help me be motivated but not letting certain things in the media or in general being said about how you or how your team played really helps. Just blocking negativity helps in a big way and I think honestly what keeps me motivated is failure and to ever look back in the future and wish I did more.

CC: What is some advice you would give to your younger self?

O’Neal: Don’t take it for granted because I feel like I used to play the game just for fun and not just because I loved it or took it as seriously as I take it now and I feel I had so many opportunities to do so much more.

CC: How many wins and losses has your team had?

O’Neal: So far our Varsity has had six wins and three losses and our JV has had five wins and four losses.

CC: Is the team planning on going to any tournaments during Christmas break?

O’Neal: Yes there is a JV tournament at Hoover Dec 17-18 and varsity has a Spain Park tournament Dec. 20-22 and Ballin’ Prep National invitation at Hazel Green Dec. 27-29.

CC: What are your personal goals for your basketball career?

O’Neal: My goals are to have fun with the game I love, just keep playing as hard as I can and also become more confident. If I’m able to go further with the game then that’s cool too.

CC: Are there any challenges you have when it comes to basketball?

O’Neal: My biggest challenges would be trusting myself with what I know I can do, attacking the basket more often and taking open shots.

CC: Is there anything that discourages you?

O’Neal: I think my biggest discouragement was my injury and getting back to how I used to be but I don’t really have anything else and that was a while ago. I’m a completely different person now and have improved so much.