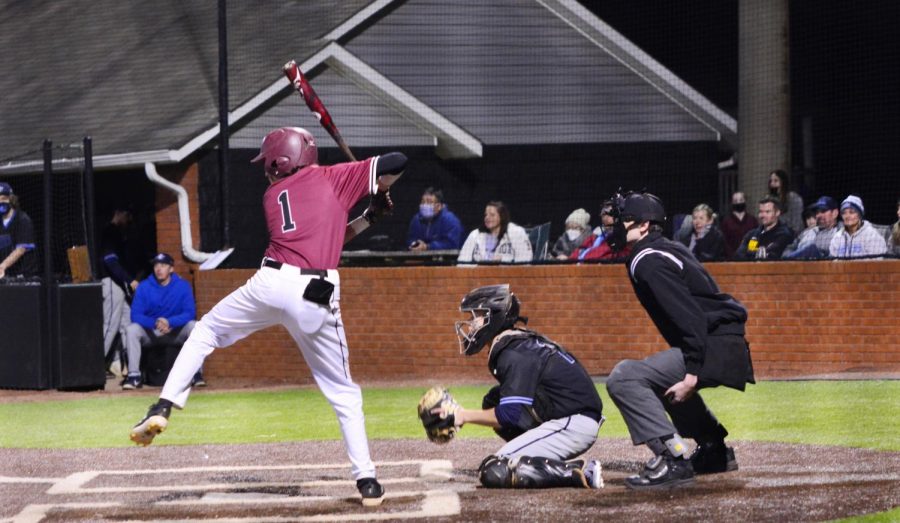 With his eye on the ball, senior Dillion Ysalgue gets ready to take a swing.

The baseball team made it to the semi-finals before being beat in a 2-1 series against Florence. The team finished the year in the state’s Top 10, 7A programs. The Crimson Crier sat down to get head coach Jason Brewer’s rundown of the team’s success.

CC:  How did you adapt to this year’s struggles due to COVID?

Coach Brewer: The biggest adaptation we made this year was to the fact that we hadn’t been together in 4 and a half months. We had all grown during that time as people

CC: How do you think the players adapted?

Coach Brewer: I feel our players handled it really well. I think is was a little easier for them as they were around each other more over the summer months as they played summer baseball together and against one another. As coaches it was a little more difficult due to the restrictions we had to follow.

CC: Did you implement anything new to your training this year? If so, what was it?

Coach Brewer: With the addition of social distancing and masks we went to more interval training. Basically training in short time cycles and more moving from station to station. It was our best plan to make sure that we protected the health of everyone in our program.

CC: What were your thoughts and feelings regarding how this season went?

Coach Brewer: Obviously the season did not end the way we all wanted it to, however, it was our most successful season since 2017 26 wins and a quarterfinal appearance after the COVID shortened the 2020  season is something to be extremely proud of.

CC: Tell me about the most memorable moment of this season.

Coach Brewer: The most memorable moment of the season was our bus ride back from Albertville when found out that Huntsville had beaten Grissom giving us a chance to win the area championship. That would lead to another memorable moment, hosting the 1st round of the playoffs.

CC: Would you do anything different?

Coach Brewer: Hindsight is always 20/20, and of course there are things I would do differently but I truly believe that this season was special for its own reasons and nothing I could or should had done would change that. Our guys were awesome!

CC: Did you set any goals for your players this year? If so, what were they? Did they meet them ?

Coach Brewer: In my 2nd year we made a list of 10 items to accomplish the ultimate team goal of winning a state championship. This team made it further down that list than any team before them.

CC: Did you have goals for yourself as a coach this year? What were they and did you accomplish them?

Coach Brewer: As a coach I am always self critiquing on a daily basis. Every summer I sit down and start listing out the things I felt like I did well and the things I didn’t do so well. One of the main goals for this last season was to trust my instincts more. I sometimes 2nd guess too much and I feel like I did a much better job of that.

CC: What have you learned from this year?

Coach Brewer: I learned this year that teenagers are much more self aware than we may think as adults. Our guys had to watch their season last year get shut down and they were well aware that it could potentially happen again. They approached each the day with the mindset of getting better.

CC: What are your hopes and goals for next year?

Coach Brewer: The goals for next year are to check the next line of the list and see how far beyond that we can go!! Go Senators!!!