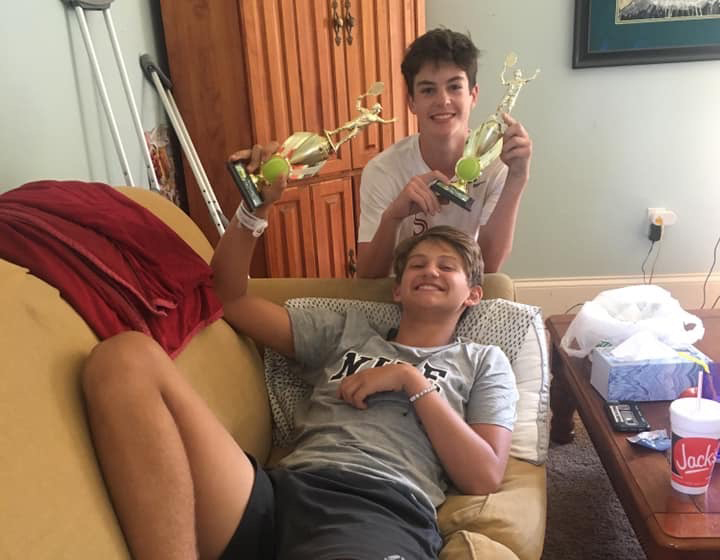 Teammates Have Something to Celebrate Despite Injury

Teammates Have Something to Celebrate Despite Injury

With the new tennis season approaching rapidly, players are working diligently to get in shape and build teamwork. One student, however, suffered a devastating injury while preparing for this breakout season.

Sophomores Jared Wulff and Ethan Cuzzort were up 5-1 during a doubles match while playing against a pair from Muscle Shoals. They had had a successful day thus far, and were in line to win the whole tournament.

“After a long day of competing, it was finally our last match,” Wulff said. “I ran back for a ball and my leg just snapped.”

The pair was forced to forfeit the match as Wulff required immediate medical assistance. However, due to their earlier winnings, the pair received first place in the tournament.

“We did continue and win the trophy,” Wulff said. “I plan to put a little Band-Aid on the figurine to match my own boot so that I’ll always remember that day.”

After having surgery, Wulff was instructed that he was not to be walking for four to six weeks, and will need an additional couple of months to recover after that. With the upcoming tennis season beginning in January, he is unsure of his ability to participate.

“I will most likely be able to play,” Wulff said. “I just need to work harder and keep getting better.”

Last season, the team won County and even defeated James Clemons in doubles for the first time in history. The end of the season brought devastation, however, when the seniors, a majority of the team, graduated.

“It was hard losing so many seniors, but I think we’ll have a good building year this year and success in the coming years nonetheless,” Cuzzort said.

This week, the team held tryouts and will be finalizing results soon. Their first practices begin in January, and they will compete soon after. As of now, the first matches are scheduled for Feb. 11.

“We’re all excited for another great season, and I believe we have a lot of potential,” Cuzzort said.