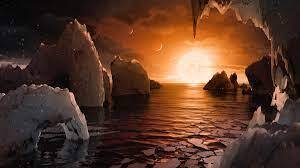 Science Column: The Great Filter May Stop Humanity From Advancing

The Great Filter is a fairly simple, but scary concept to think about. The basics of this theory is that there is a filter that previous species could not cross, or caught them from advancing. This filter could be many things, like the way society acts, or an extreme disaster caused by mother nature, or by that species itself. There are two possible scenarios for our species. We could be extremely lucky, or we are doomed and basically already dead.

The first is the filter is behind us. This would mean, humans as a species are going through uncharted territory that no other species throughout our galaxy has reached. In turn, one of the steps that is needed to get to where we are today is nearly impossible for other species’ to achieve, maybe life in itself is rare to come by which would explain why we haven’t made contact, or seen any other life forms out in space. A step that could have been skipped is the evolution of a prokaryotic cell to a eukaryotic cell. This evolution is when, what we know as the mitochondria, was consumed by a primitive hunter cell and formed a union. This union allowed the cells to evolve as one and has now become the cell that is in every living thing on our planet. There is a chance that the big brain that we developed, didn’t happen for other species. A big brain is a very expensive and energy consuming thing, it sadly doesn’t really help a primitive human in a fight with a bear. Intelligence could have been the downfall for other species and we got lucky.

Worst case scenario is the filter is in front of us. That would mean the filter is so incredibly bad that each and every species that reaches the filter, dies 100 percent of the time. This filter would be worse than anything our planet has faced before. A theory is once a theory takes control of its planet then it has already doomed it’s species. Technology is a good way to achieve this. It is something that needs to be so obvious that everyone discovers it and its discovery always leads to the demise of the species. An all-out nuclear war, an experiment that lights the entire atmosphere on fire, or AI intelligence that decides to kill everyone. It could simply be that while trying to take control of the planet, the extraction of a certain element causes a chain reaction that is irreversible.

The Great Filter is a scary theory to think about, the fact there is a chance that our lives and planet is at the whim of something that no one can control. This thought will make anyone contemplate their existence, but the fact that someone can theorize these things and if it is true the slight glimmer of hope that as a species we can still escape this filter and start anew on another planet giving our species time to become a galaxy wide civilization.