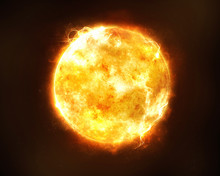 Science Column: The Dangers of Our Sun

The very thing that gives our planet life is just as dangerous as a meteor striking a major city today. The sun is like any star in the universe and they they tend to have what are called solar flares, these flares can be pretty harmless to us because of our atmosphere, but we can take a look at a planet like Mercury and see the damage that could be caused if not for our atmosphere and our position in the solar system. However, our sun can have even more powerful flares, called solar storms, think of them as a hurricane of plasma being shot out at the speed of light.

Our sun is made up of plasma and is held together and pushed around by a magnetic field that is brought together by electromagnetism. The electrically charged electrons and protons create an electric field that shapes the flow of particles in our sun. They are in a constant feedback loop called a dynamo, which keeps the magnetic field alive. As the plasma continues to flow the magnetic field becomes less calm and behind to tangle around itself, this creates knots that build up tons of energy that will eventually shoot out, which we know as a solar flare. They are also Coronal Mass Ejections, or CME’s that are even more powerful than the average solar flare. We are protected by our atmosphere and are deflected and redirected back to the north and south poles where the particles fall into the atmosphere and cause the atmosphere to glow, we know this as the Aurora Borealis. However, there are even more dangerous flares, known as solar super storms.

These solar super storms can cause major damage to the infrastructure that we have setup here on earth. If these storms were to hit the earth it could possibly completely wipe out electricity for entire countries. The worst part about these storms is the fact that they have a trend of happening about every decade, the last one happening in 2012 so we may be due for one. Because our world runs on electricity, a solar superstorm, without the proper preparation, could cause millions of lives and possibly trillions of dollars in repairs. However, there is a bright spot for all of this. When the sun basically spits at us scientists are able to detect this hours, even to days in advance which allows us to shut city and country power systems down. We cause a temporary blackout to avoid the power systems to be fried and out of commission for possible years.

Our sun is what gives us and this entire planet life and even the sun can cause destruction across a massive scale, but when studied, we can protect ourselves from devastation and hopefully thrive on this planet for many years to come.