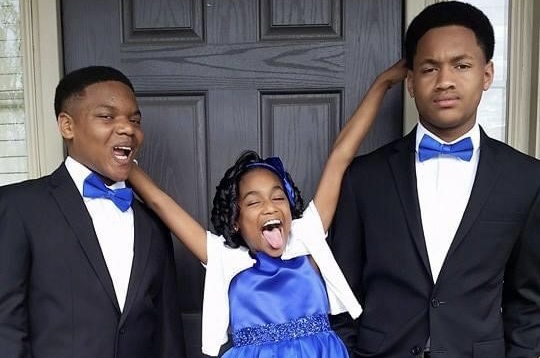 Bria Howard with her two older brothers in 2015

Movie nights, video games and just tagging along. Those are all things I did with my two brothers growing up. Both of them were ways older than me, but I never failed to stay right behind them in whatever they were doing.

Of course, when I first came into the picture, my brothers weren’t the most excited, one of them even went as far as to wish that I was taken away by a burglar. Yikes, I know. As we grew up, they started to like me more. The sibling fights never stopped though, and I will admit being the youngest did come in handy when it came to those fights.

Growing up I knew that I was younger and that I would always be in grades lower than them in school, while I was in elementary they were already in middle school, but it didn’t really hit me until seventh grade when my oldest brother left for college.

It was weird seeing one of them leave and I knew that the next year my other brother would leave as well. Of course, they came and visited often, matter of fact my oldest brother had to stay home from school because of COVID protocols at his campus but he had to leave the year after which left me at home with just my parents.

My parents have been doing a lot of things at home that gets us together since I’m alone, whether that be movies, eating out and cooking at home. My brothers and I all stayed upstairs and now that they’re both gone I’m upstairs by myself. I’m very appreciative of my parents making sure that I have people to hang out with at home and it’s been really fun.

At the end of the day, I miss my brothers. As much as I try to act like I don’t care, I really do. Before my oldest brother left I cried and I don’t regret it. I know they aren’t gone forever, but I do miss them being around all the time.