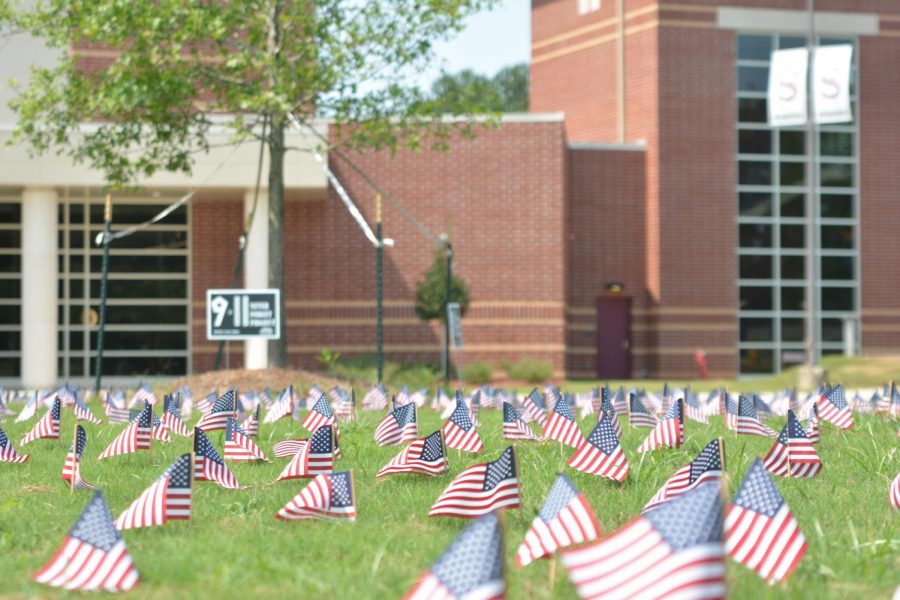 The 9/11 Memorial in front of Sparkman high School

Twenty years ago the towers collapsed, and America was thrust into a long-lasting conflict spanning decades. So many Americans are still facing the hardships of the crisis.

I never experienced the tragedy of what happened that fateful day; I have only known the world and more specifically the America that was formed from the terrible tragedy. When I was born in 2003, America was still waging war in Afghanistan and was preparing to invade Iraq. By the time I was born, America had already started a war in the Middle East and was getting ready to start another. This all came about because of what happened on 9/11.

Asking those who lived through that time, I have noticed one consistent thing and that is that everyone came together in a time of tragedy, embraced their patriotism and rallied behind going to war. You saw similar things when America was entering after the bombing of Pearl Harbor.

I have never experienced an event like this, the rallying of patriotism, around an event. I do not think we got the same thing with COVID. There was not this idea of rallying together to fight against the virus. To this day there are still a lot of lies and things being spread about the virus. Some people still do not believe it is a real threat. Sept. 11, though was a real threat and everyone believed that and so you had this unification to fight against terrorism and stand up against those trying to hurt our country.

Living in a post 9/11 world weighs heavily on me. It is an odd thing to think about when you really examine it in actuality. My generation will always learn and be taught about the tragedy of that day because the teachers of today remember that day very vividly. With it only being 20 years since 9/11, it is still very fresh on their minds. It is still something very resonant with the teachers and the older generations.

While I never experienced the 9/11 tragedy, I will always live in an America that looms in the background of it, for a surplus of issues were spring-boarded from what happened on 9/11 many goods and bad things came from the events of that day. You had America entering a long-standing war in Afghanistan that just recently ended with the Biden administration. You had the formation of the Victims Compensation Act (VCA) which was made to help and give those family’s money for their lost loved ones and for people being hurt.

9/11 left the country in shambles. Americans have been through two wars in the Middle East since then they have had to deal with the loss of their children, and have had to deal with pain I could never imagine. I will never know what it is like to live in the world my parents lived in. They experienced an entirely different America, and I will never know what that was like. That is why we keep the memory of what happened alive and teach my generation about what happened before that tragedy and why we should remember what happened even though we were not there.