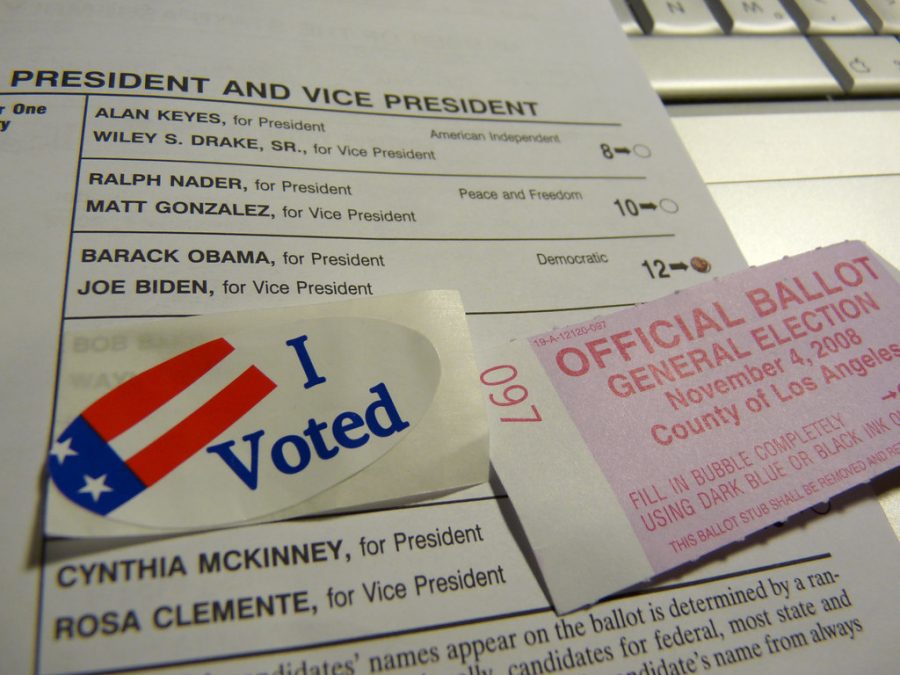 Photo Credit: "I Voted!" by starbright31 is licensed under CC BY-NC-ND 2.0 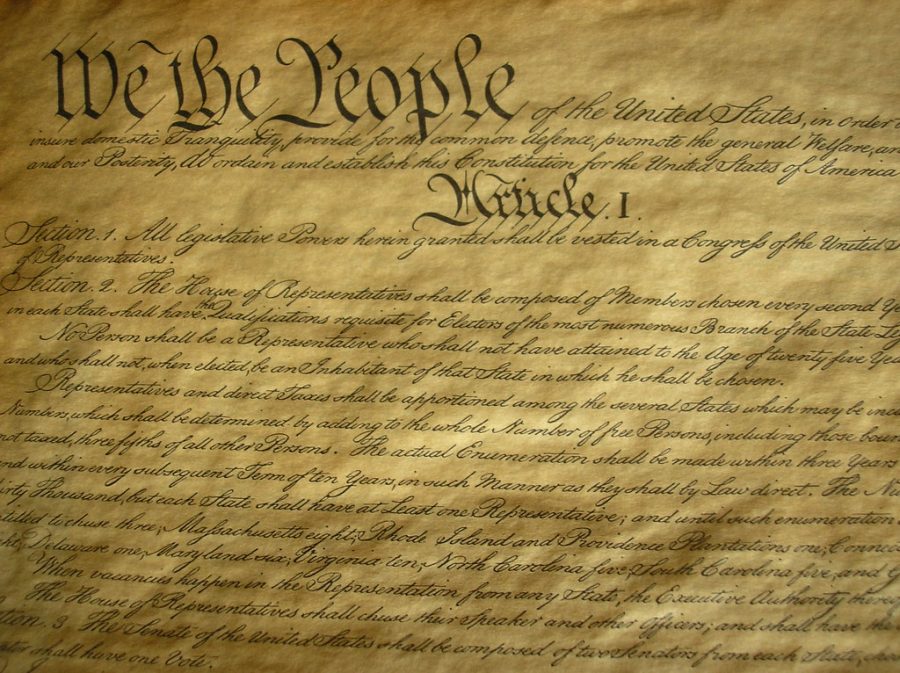 Photo Credit: "US Constitution" by Jonathan Thorne CC is licensed under CC BY-NC 2.0

Late last month, the Georgia legislature passed a bill to secure elections. This bill addressed many concerns from the 2020 election of possible fraud or other problems. It was slandered as racist by its liberal opponents and the state was attacked by corporations. The state of Georgia retaliated to punish the corporations that were hurting the people of Georgia.

The election security bill put in place many protections from any possible fraud. Some of the protections put in place include limiting drop boxed, taking away some of the authority of the Secretary of State, putting in place new oversight county election boards, requiring ID for both in-person and absentee voting and banning groups from providing food or water to voters in lines. These are all reasonable and legal protections to be put in place. Drop boxes are boxes put out where anyone can submit a ballot. The problem with these is you can’t be sure that the ballot submitted came from the person who it claims to be. During the 2020 election, many people reported receiving multiple ballots and some weren’t even for them. Drop boxes allowed for them to possibly submit those ballots. Unmanned drop boxes are worse. They allow for what was previously stated along with ballot harvesting. Ballot harvesting is where someone or a group picks up multiple people’s ballots and turn them in. The issue with this practice is the group can be biased and target areas that heavily favor their biases. They can also throw out ballots if they don’t agree with who was voted for. What happens between the ballots being picked up and submitted is unknown and very insecure. It is also illegal in Georgia to ballot harvest, the only exception is a person taking the ballot of a physically impaired family member. Unmanned drop boxes allow for illegal ballot harvesters to submit their ballots because no one is there to catch them.

“The times, places and manner of holding elections for senators and representatives, shall be prescribed in each state by the Legislature” is what the US constitution says in her election clause. It gives the state legislature control over the elections in her state. Many states gave control to their secretary of states. If the legislature wants to take back the power from the secretary of state, it is within their constitutional powers to do so. The same argument is for the new oversight county election boards. These actions are legal and constitutional.

The new law also makes IDs required to vote. This is necessary to make sure that the person voting is who they say they are. It also ensures that the person voting is a citizen of Georgia and not from another state, a foreigner or is an illegal alien. It secures the election. The slanderous criticism of this is that voter ID laws are racist because black people don’t have IDs. This is an absurd claim. When someone considers their claim, they realize that what is actually being said is black people don’t have IDs because they don’t know how to get Georgia’s free ID. That is an insult to their intelligence. The problem is these people who say this are just repeating their talking points they’ve been fed and not giving it a second thought. There are probably eight degrees of separation between the people who parrot the voter ID is racist claim and the original thought.

One of the most absurd-sounding parts of the law is banning the distribution of food and water in voting lines. The media will just say “They’re banning groups from giving out food and water” to make the law sound unnecessary and absurd. What this provision actually is addressing is where groups of political activists wearing, for example, planned parenthood or other political group shirts and giving the voters free water to attempt to influence their votes. When told to leave, they will hide behind the fact that they are “just handing out water” and continue to influence voters. The media wouldn’t explain this because they are also political activists and not journalists, as exposed by Project Veritas when one of their undercover reporters caught a CNN employee talking about using their platform to push their false agenda instead of the truth.

After the bill was passed, major corporations criticized Georgia and tried to force them to remove the bill. The corporations are trying to subvert the laws put in place by the representatives that the people of Georgia voted for. That is more undemocratic than trying to secure elections. The actions of the corporations and liberals exemplify the “cries out in pain as they attack you” strategy they use. The corporations didn’t stop with social media statements. The MLB decided to move their game to a different state, hurting the businesses of Georgia that would have benefited from the increased traffic from the game. This is hurting the people in an attempt to change laws against the will of the people who elected those representatives. This is the same thing that happened in South Dakota. The elected representatives of the people of South Dakota voted for a bill that would keep men out of women’s sports. Due to the NCAA intervening, the governor wouldn’t sign the bill. This governor subverted the will of the people for corporate interests. Thankfully, the legislature overturned the veto. Every time Republicans do anything of value they get push back from the biggest corporations ever, the Chamber of Commerce and the media. How do the elites of our country represent the people? This shows how conservatives need to stop worshiping capitalism and corporations.

The Republicans unexpectedly responded in a strong manner instead of turning over and giving up to the will of the biggest corporations ever. They decided to punish those corporations who were attacking their state. They tried to take away Delta’s tax credits along with other retaliations for Coca-Cola and the MLB. The Georgia Republicans should do this and it should be emulated by Republicans in the other 49 states. The Republicans shouldn’t feed the dog who bites them. The Democrats have no problem with using their power to punish their political rivals, as shown by the feds targeting the people in the Jan 6th protest which is glorified trespassing that resulted in the only one murder, which was of an unarmed Trump supporter, and some broken windows. They are using the feds to target the Jan 6th protestors while BLM has been and continues to violently riot, burn and loot given free reign to continue and even encouraged by members of Congress. The Republicans should use the power given to them to pursue their interests.

The Republicans were accused of participating in cancel culture that they claim to oppose. This is untrue and is a result of cancel culture losing its meaning. Cancel culture is only talked about when someone famous is canceled like Gina Carano from The Mandalorian. What the term really applies to is a common person losing his job, livelihood, social media etc. for expressing an opinion not supported by the liberal media.

The Georgia voting security bill is a good, legal and constitutional bill. The Georgia representatives should have passed this bill and are correct when they didn’t bow to corporate pressure. Liberals often think of themselves as protecting the interests of the common man, but all of the major corporations, chambers of commerce and elites agree with them. How are the interests of selling out our country to increase the elite’s bottom line working for the common man?

Photo Credit: "I Voted!" by starbright31 is licensed under CC BY-NC-ND 2.0

In light of what some are calling “the new Jim Crow voting law” getting passed in Georgia, more than 100 companies are denouncing the law as well as halting donations and investments to fight other voting bills. As a descendant of those who fought and in many cases gave their life for my right to vote, I know how important it is to make voting accessible. After all it is a right to every American citizen and should be treated as such. Georgia legislatures decided that they did not like the fact that Black voters had so much power and now they are reaping what they sowed.

To be honest, I could care less about what companies do with their money especially when it comes to Black folks. Black people are accustomed to fighting these battles alone and can do it with or without white CEO’s, but I can say that I enjoy seeing the backlash that Georgia’s legislature is receiving. If anything these companies getting involved teaches Georgia a lesson and other states that are considering doing the same with their bills.

The ones angry about it and wanting companies to stay out of it reminds me of a certain Fox News host telling LeBron James to “shut up and dribble” as if athletes and companies can not express their political opinions and concerns. This country belongs to them as much as it does to politicians and political commentators and it does not stop belonging to them when they do not agree with the “party of law and order” on a civil rights issue.

I just find it ironic that in the ‘60s Black people were in the streets fighting for voting rights, fighting against Jim Crow laws and now Black people are again saying “hey stop trying to infringe on our rights” and GOP legislatures do not see the pattern. Nonetheless, these companies do and they are more than welcome to expose it how they want. Of course, the GOP is going to throw a fit about it because that is what they are best at, but hey, they are the party that loves to keep things privately owned.

And these private companies have the right to halt their private money in any way they choose for whatever reason they choose. So the right can boycott all they want, tweet about it all they want, call the left anything they want, it will not change the fact that these companies see something that they do not: voting is a right, not a privilege and yes it must be protected, but not at the expense of poor and Black communities.