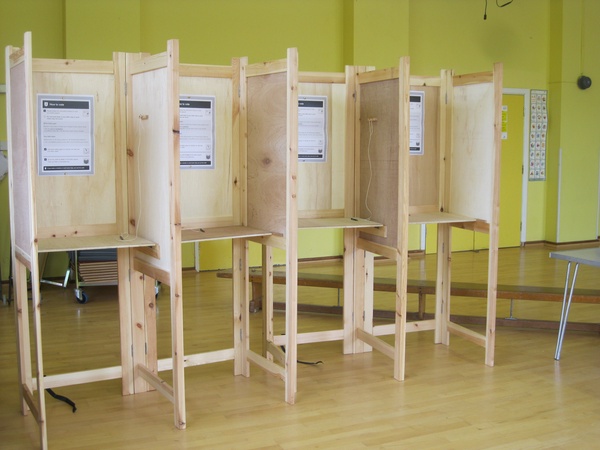 "File:UK Polling Booth 2011.JPG" by Microchip08 is marked under CC0 1.0. To view the terms, visit http://creativecommons.org/publicdomain/zero/1.0/deed.en

A record amount of voters turned out on Tuesday, Nov. 3.

Personal Column: My Day As A Poll Worker

First Baptist Church Merdianville is where I spent my day from 6 a.m. to 8 p.m. this Election Day. I arrived at the church at 5:45 a.m.on Election Day. A line of over 20 people were already waiting for the doors to open over an hour later, folding chairs and blankets were spread all down the sidewalk. I stood outside waiting for someone to let me in for only around 15 minutes but I was already freezing.

The doors were finally opened and I was greeted by some of the most energetic people I have met in my life. I was not able to go to training for poll work the previous night so I did not know what I would be doing for the next 14 hours. As soon as I got my stuff sat down, the chaos began, running around organizing supplies, opening the machines and setting up tables. I was so eager to get started and see what would come of this day which was predicted to be one of the largest turnouts of voters in American history. I honestly think it was.

The doors opened up at 7a.m. and I do not believe we stopped until after 10:30. I was tasked with sanitizing every voting table and booth after each voter used it. It was a long day of standing and walking and running from table to table. Since this was my job for the entire day I was the only poll worker on the floor the entire day, it was really exciting to see all the different people coming in to vote. It was even more amazing to hear all the young and older people coming in saying they were voting for the first time.

Being on the floor, I was responsible for getting voters pens and providing guidance. While I was working throughout the day I was so surprised to see how many people had questions about their ballots. Whether they did not know how to vote straight ticket, did not understand the amendments or just had no clue how to even vote, I was so glad I was someone educated on how voting works. It felt good to be able to help people understand the ballot and show them how to vote for the people they wished.

It also to some extent saddened me how many people really did not understand the simplest things on the ballot. I feel it is important to research candidates and know what the amendments mean before going to vote. Taking the time to understand your beliefs and which candidate best align with your beliefs is extremely important, I watched so many people Tuesday vote straight party not knowing what it truly meant. It is hard to watch people that are making history not even care what they are doing or advocating for. It was also scary how many people did not care to even read the amendments on the ballot. Many people did not choose to vote on the amendments instead of asking questions or attempting to understand.

The experience overall was something I am so grateful I got to experience, especially this year. Even though I could not vote but through poll working I felt I did so much to contribute. It was something I definitely feel I will be doing again next election. The effort and long hours were extremely tiring and one thing I have to say is thank your poll workers, they work endlessly to enable you to get your vote in. Without our poll workers there would be no elections, it simply would not be possible, from 6 a.m. to 8 p.m. they work to make your vote count.