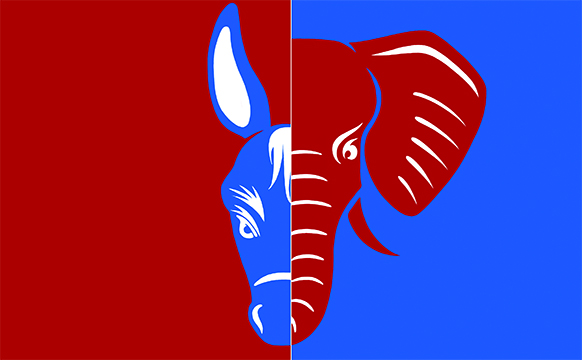 Just a day before the historic 2020 elections, experts agree on one thing: Joe Biden will be the next President of the United States.

Four years ago, one of the greatest political upsets of all time occurred. Donald Trump, a reality television star and billionaire businessman, trailed in nearly every national poll before winning 30 states and 304 electoral votes. Today, his polling numbers are even worse. Luckily for the president, the polls mean nothing.

In 2016, Hillary Clinton depended on the “Blue Wall” of the Midwest consisting of Ohio, Iowa, Michigan, Minnesota, Pennsylvania, and Wisconsin. Trump cracked it, winning five of six states and narrowly losing Minnesota. It was one of the night’s biggest shockers.

Trump won nearly every battleground state that Mitt Romney, the 2012 Republican nominee, failed to win just four years prior, including Florida, Iowa, and Ohio. Here are the biggest swing states of this election cycle:

Traditionally the most important state in presidential elections, the Sunshine State has voted for the winner of every election since 1996. President Trump narrowly won Florida in 2016, and election analysts believe that no matter who wins the state this Tuesday, it is going to be close. Several polls have Trump leading, and several have Biden up. While Biden can afford a loss in Florida, winning the election is a longshot for Trump without it.

Historically Republican, Arizona has trended increasingly Democratic over the past few elections. It was one of the few states in 2016 where Republicans lost traction, only winning it by three-and-a-half points compared to a nine point win in 2012. The state’s most prominent Republican, Senator John McCain, passed away in 2018. McCain’s death could impact how the race plays out, as many Arizona Republicans followed the party because of him. Current polling in the state has Biden and Trump neck and neck. Arizona is a crucial battleground state and it could vote either way on Tuesday.

Once again a contest of utmost importance, North Carolina is competitive. The state has a Democratic governor and two Republican senators, a rarity in the US. Although it is a swing state, North Carolina tends to vote Republican. Since 1976, the Tar Heel State has only voted for a Democrat once. Donald Trump carried North Carolina in 2016 by three points. This year, it is expected to be close again.

Perhaps the most intriguing region of the 2020 presidential election, the midwest will likely determine which presidential candidate will be sworn in on the steps of the Capitol in January. Polling indicates that Ohio and Iowa lean toward a Trump victory, while Michigan, Minnesota, Pennsylvania, and Wisconsin point to a Biden victory. In order to successfully be re-elected, it is assumed that Trump must win Iowa, Ohio, and at least one of Michigan, Minnesota, Pennsylvania, and Wisconsin. Both candidates have campaigned hard in the region, traveling to each state multiple times. Joe Biden’s home state of Pennsylvania may be the most important contest of the entire race, as it is very competitive and worth 20 electoral votes.

Georgia, Nevada, New Hampshire, and Texas are states that are highly improbable to flip from which party they have voted for in the last few elections. Georgia and Texas, two key Republican strongpoints, have been targeted by the Biden campaign as potential upset wins. Nevada and New Hampshire, states that haven’t voted Republican since George W. Bush, are places the Trump campaign feel confident they can win. Regardless, it is unlikely that any fringe swing state will change its normal voting pattern.

Thirty-five Senate seats will be in play this Tuesday, including two special elections. Republicans currently control the Senate 53-47, but will they lose that majority? Here are the seats up for grabs:

Democratic seats that will probably/certainly be flipped

In Alabama, there is little hope that Democrat Doug Jones will be re-elected. After a stunning 2017 special election victory over the controversial Roy Moore, his chances of winning are much smaller this time. Tommy Tuberville, a former college football coach, is expected to easily be elected. Up in the polls, Tuberville should have no problem carrying the election in one of the most Republican states in the country.

Republican seats that will probably/certainly be flipped

Colorado Senator Cory Gardner is faced with his imminent exit from office. His opponent, John Hickenlooper, is an extremely popular former Democratic governor of the state who ran for president last year. Hickenlooper has raised much more money than Gardner, and the polls reflect that.

In Maine, incumbent Republican Senator Susan Collins faces Sara Gideon, Speaker of the Maine House of Representatives. Since Collins was first elected to the Senate in 1996, she has had little opposition running for re-election. This time, her future in national politics is in serious jeopardy. Collins is the only Republican elected to national office in Maine, and she is down in almost every poll.

Another Republican incumbent with a low chance of being elected is Senator Martha McSalley of Arizona. Running against former astronaut Mark Kelly, McSalley has a tough path to triumph. Trailing by an average of over five points in the polls, McSalley desperately hopes Arizona citizens will vote straight ticket Republican.

North Carolina incumbent Republican Senator Tom Tillis takes on Cal Cunningham in one of the most highly contested Senate races of the entire election cycle. Possibly the most viewed race, donors of both political parties have given millions of dollars to the candidates. Currently, Cunningham possesses a very slight lead over Tillis in polling.

Democrat Gary Peters of Michigan is attempting to be re-elected to a second term in the Senate against former Iraqi war veteran John James. James, who previously ran for Senate in 2018 and nearly won, feels confident this time will be different. Endorsed by Trump, James hopes the president’s support will boost him to a win. According to recent polling, Peters has about a five point advantage over James.

The US House flipping to Republican is doubtful if the 2018 Midterm elections were indicative of anything. President Trump has advocated that the House will turn red, but political strategists disagree. After picking up 41 seats in 2018, many believe the Democrats could pick up even more this year. However, an upset is not completely out of the question; House elections can be unpredictable due to so many races engaging at the same time. Either way, it is predicted that Democrats will hold on to their majority.

Donald Trump will win this election in an electoral map landslide. While the popular vote will likely go to Biden, Trump will surprise millions of Americans by winning every single critical swing state.

The polls are wrong regardless of if Trump wins or loses this election. Supporters of the president are scared to state their preference, even if it is only on the phone. As the president always says, “The silent majority is stronger than ever.”

New Hampshire and Minnesota will flip to Republican. Looting and rioting from the summer Black Lives Matter protests will work to the opposite effect as expected in Minnesota. In a state that has voted for Democrats since 1972, the change is now. Minnesota will shock the world.

New Hampshire was the closest margin of victory Hillary Clinton had in 2016, decided by less than three thousand votes. Tuesday, Trump will win New Hampshire and carry its four electoral votes.

President Trump will sweep the Midwest swing states. He will win Florida and Arizona, as well as every state he carried in 2016. Trump will get very close to winning Nevada and Maine. He is going to win re-election, and it won’t be close. Here is my electoral map:

While I believe Trump will probably win, it would be ignorant to ignore the possibility that he may lose. If he does, the electoral map will look like this:

No matter who wins the presidential election, Republicans will control the Senate. They will pick up seats in Alabama and Michigan and lose seats in Arizona, Colorado, and Maine. The composition of the Senate will barely change from a 53-47 Republican majority to 52-48.

The House of Representatives will stay under Democratic control. The likelihood Republicans take the House is slim.

My FINAL predictions: Republicans maintain power, keeping both the presidency and Senate. Democrats will continue their rule over the House.