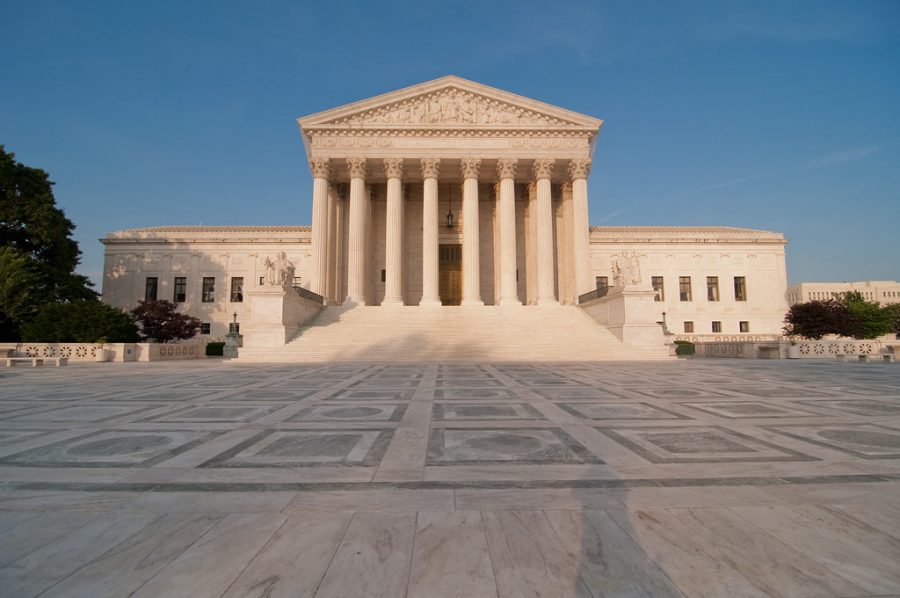 "Supreme Court" by Mark Fischer is licensed under CC BY-SA 2.0

Justice Ruth Bader Ginsburg greets people at an event. Ginsburg’s death led to the debate over whether or not President Trump should be able to nominate a replacement.

In the wake of the tragic death of an American hero, judge Ruth Bader Ginsburg, the decision to replace her seat has arisen.

Twenty-nine times in history, a Supreme Court justice has passed in an election year. And as expected, all 29 times the President has used their rightful power to appoint a nominee that they want to the court however, the Supreme Court has not always voted on that nominee, and they do have the right to refuse to do so.

I am not here to say that President Trump should not have appointed a justice, because that argument does not do any good now that he has already done so, however I am here to say that Amy Coney Barrett is not the woman for the job.

Barrett has strictly followed conservative voting records in cases regarding discrimination, gun rights and immigration. President Trump has also vowed to appoint a justice that is ready to overturn Roe v Wade, therefore the conclusion can be drawn that Barrett is armed and ready to rip women’s rights to control their own bodies away from them.

Despite Barrett’s education and qualification, the scary thing is her association with People of Praise, a religious group that believes women should be subservient to men. An idea such as that being held by people in power is extremely dangerous and should not be allowed in our government. Ginsburg made decisions to progress the rights of women to be strong and independent. Coney’s beliefs go against those very rights of women being able to stand on their own.

And then there is the point to make that electing a new justice directly goes against the late Ginsburg’s dying wish. Her granddaughter confirmed that she did not want President Trump to fill her seat prior to the results of the election. While there is no legal requirement from him to not do so, he could at the very least show some morsel of respect for a woman who has fought so hard for equality for Americans in her lifetime.

Furthermore, if Barrett was elected to the Supreme Court, it would push the Republican appointees to outnumber the Democrats six to three. The entire idea of the Supreme Court depends on balance, and it would only be further thrown off. America is already in a state of division and President Trump is simply deepening the division with his nominee.

While the President insists that he has the right to elect a nominee because it is his “Constitutional duty” as a president elected by the people, this is simply not true. Anyone paying attention in 2016 would know that Donald Trump did not win the presidential election because of the popular vote, and therefore is not the president that the majority of the American people truly elected. And this is why the judge should not be appointed until after the inauguration on Jan. 20, that way the judge is under someone the people truly wanted in power.

"President Donald J. Trump and First Lady Melania Trump at the Supreme Court of the United States" by The White House is marked with CC PDM 1.0

It is important in deciding what people believe to know the rules and processes applying to what one is talking about. To become a Supreme Court Justice, one must first be nominated by the sitting president. Then the Senate Judiciary Committee collects relevant information both for and against the nominee. After all the evidence has been presented, the committee will decide whether or not to recommend the senate to appoint the nominee. After that, the Senate debates and votes on the confirmation. Then the Senate votes for or against the nominee. The one with a simple majority wins.

There are claims that nominating and approving Donald Trump’s nominee is unprecedented. It is not. Historically, there have been 29 instances of a Supreme Court vacancy during an election year. Ten of those instances had a senate of the opposite party and in six the president nominated a justice. In all but one, the Senate did not approve the nomination. In the other 19 instances, the Senate and President were from the same party. Ten of those had a nomination before the election and 9 were confirmed. Historical precedent shows that, in almost all cases, the Senate will approve the justice in an election year if they are from the same party and will not if they are from opposite parties.

Ruth Ginsburg’s seat. Opponents of this claim allowing a vote is hypocritical. It is not. Not only does the historical precedent follow these events, but McConnell’s reasoning is consistent. In 2014, the Republicans gained a majority in the senate. This showed that the American people were moving in a Republican direction. This means the Senate had a duty to check the other branches from doing things the American people would not support. This includes the Supreme Court Nomination. In 2018, unlike in 2014, the American people voted for a Senate that was in line with their President. This allows the Senate to push for the policies that are in line with the President, including approving his nominee.

In 2017, President Trump nominated her to the US Court of Appeals for the Seventh Circuit. In her Senate hearing, she was questioned about whether her religious views would affect her judgment. Barrett explained how It is never appropriate for a judge to impose that judge’s personal convictions on the law. Sen. Dianne Feinstein later said in that hearing that “the dogma lives loudly in you.” This was seen by many, including Barrett and former Sen. Orrin Hatch who was on that committee, as an attack on religious people, saying they cannot be impartial because of their religious beliefs. Barrett responded saying that many judges have strong religious beliefs that do not affect their judgment and she would do the same. Barrett is an originalist judge. Originalists believe judges should follow what the constitution says and not create laws from the bench.

Barrett has ruled in cases that show us her beliefs and values as a judge. In Kanther v. Barr, Kanther was convicted of mail fraud and was barred from owning a firearm. The court ruled to uphold the barring, however, she dissented stating that non-violent felons should be able to purchase firearms and should not be treated as second class citizens. This shows us her Constitutionalist mindset and support for the second amendment.

In Doe v. Purdue, John Doe filed a suit against Purdue University for discrimination based on sex and deprivation of due process. The college found Doe guilty of sexual assault without interviewing the victim, using an admission of guilt he never made, and not allowing him to present evidence of his innocence. Doe lost his ROTC scholarship, was expelled from the ROTC, and suspended for one year. Barrett ruled that the college discriminated against Doe under title IX and deprived him of due process. This shows us again her constitutionalist mindset and support of the due process.

Barrett also dissented on a case that ruled an Indiana law banning abortion based on the babies’ race, sex, and disability of the fetus and also banned fetuses from being disposed of as medical waste as unconstitutional. She stated in her dissent that “None of the Court’s abortion decisions holds that states are powerless to prevent abortions designed to choose the sex, race, and other attributes of children.” This shows us some of her beliefs on abortion and states rights. However, if given the chance to overturn Roe v. Wade, she might not because she practices stare decisis. That means she bases her decisions based on past precedent made by the court.

Barrett needs to be approved by the Senate for the justice seat because she is highly qualified, has a great history of ruling in favor of the constitution, and won’t legislate from the bench. We must message our Senators, Sen. Richard Shelby and Sen. Doug Jones, telling them to confirm Barrett because she deserves the seat and not vote against her because of perceived hypocrisy or being nominated by the wrong party. Fill the seat.