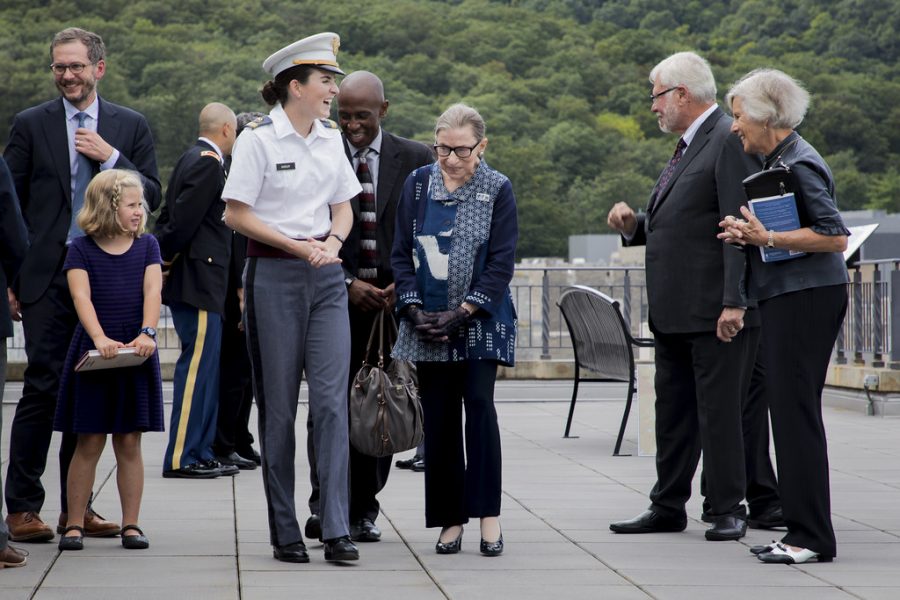 RBG Was a Legend to be Honored

On March 15, 1933, the world welcomed one of the most progressive individuals this world has ever seen. Ruth Bader Ginsburg changed many things for the good while serving as Supreme Court Justice. She made strides for the LGBTQ community, as well as for women and other minorities all across the United States. She fought against gender discrimination and unified the liberal block of the Supreme Court. Ginsburg was truly an exceptional woman with a list of accomplishments longer than anything imaginable.

Born Joan Ruth Bader in Brooklyn, New York, Ginsburg excelled at James Madison High School, taking her mother’s love for education and adopting it as her own. Unfortunately, her mother was diagnosed with cancer and died the day before Ginsburg graduated from high school, marking the first big accomplishment of many in her life. Ginsburg continued to excel in academia during her time at Cornell University where she graduated at the top of her class in 1954. After graduating, Ginsburg put her education on hold to marry her husband, Martin, and start a family. Only when her husband was drafted into two years of military service 1955 did she finally enroll at Harvard Law and got her Bachelor of Laws.

Ginsburg’s struggles did not end with her academic career. In 1956, during her first year at Harvard, her husband was diagnosed with testicular cancer. Along with her own studies, Ginsburg helped her husband maintain his schoolwork, all while staying at the top of her class. Ginsburg was one of nine women in her class at Harvard, where she faced gender discrimination on a regular basis. Despite this, Ginsburg still managed to tackle motherhood after the birth of her daughter, Jane, and succeed with flying colors. Shortly after her husband recovered from cancer, Ginsburg and her family moved to New York City so she could take a position at a law firm. With one year of law school left, Ginsburg transferred to Columbia Law in 1959 where she later graduated.

Unfortunately, her almost perfect academic record was not enough to shield Ginsburg from gender discrimination in the work place. It was not until one of her former professors completely refused to recommend any other graduates that Ginsburg received a job under the U.S. District Judge Edmund L. Palmieri as a clerk. After this, she was offered multiple jobs at law firms, but always at a much lower salary than her male counterparts. Rather than taking these job offers, Ginsburg took some time to pursue her other legal passion, civil procedure. She finally chose to join the Columbia Project on International Civil Procedure. This project allowed her to live abroad in Sweden where she fully immersed herself  in Swedish culture to do research for her book on Swedish Civil Procedure practices. Upon her return to the United States, she accepted a job as a professor at Rutgers University Law School in 1963, a position she held until accepting an offer to teach at Columbia in 1972. She later became the first female professor to receive a tenure at Columbia University.

Ginsburg directed the influential Women’s Rights Project of the American Civil Liberties Union during the 1970s. In this position, she led the fight against gender discrimination and successfully argued six landmark cases before the U.S. Supreme Court. Ginsburg took a broad look at gender discrimination when advocating against it. She fought not only for the women left behind, but for the men who were discriminated against as well. During her time at Rutgers University, Ginsburg experienced her share of gender discrimination, even going so far as to hide her pregnancy from her colleagues. Ginsburg accepted Jimmy Carter’s appointment to the U.S. Court of Appeals for the District of Columbia in 1980. She served on the court for thirteen years until 1993, when Bill Clinton appointed her to the Supreme Court of the United States.

Ginsburg began her career as a Justice where she left off as an advocate, fighting for women’s rights as passionately as she always did. She wrote the majority opinion United States v. Virginia in 1996, holding that qualified women could not be denied admission to the Virginia Military Institute. Her style as Supreme Court Justice was described by many as slow but steady, and calculated. Instead of tackling gender discrimination all at once, she orchestrated attacks on specific areas of discrimination and violations of women’s rights in order to send a message to the legislatures on what they could and could not do. Her attitude was that major social change should not come from the courts, but from Congress and other legislatures. This method, which is still ever present in the Supreme Court today, allows for social change to remain in Congress’ power while also receiving guidance from the court. Ginsburg never shied away from giving pointed guidance when she felt the need to do so.

She dissented in Ledbetter v. Goodyear Tire & Rubber Co. where the plaintiff, a female worker being paid significantly less than males with her same qualifications, sued under Title VII but was denied relief under a statute of limitations issue. This case allowed for her to merge her passions for women’s rights and federal procedure. She broke with tradition and wrote a highly unprofessional version of her dissent to read from the bench. She also called for Congress to undo this improper interpretation of the law in her dissent. She then worked with President Obama to pass the very first piece of legislation he signed, the Lilly Ledbetter Fair Pay Act of 2009, a copy of which hangs proudly in her office.

Ginsburg worked with a personal trainer in the Supreme Court’s exercise room, and lifted more than Justices Breyer and Kagan for many years. Ginsburg remained in almost perfect health until 2015 when she was diagnosed with pancreatic cancer. Ginsburg never missed a day of oral arguments, even when she was undergoing chemotherapy for pancreatic cancer, after surgery for colon cancer, or the day after her husband passed away in 2010. Justice Ginsburg proved time and time again that she was a force to be reckoned with when challenged in the courts and that those who doubted her abilities as Justice needed only to look at her records in oral arguments, where she was, until her death, among the most avid questioners on the bench.

The Supreme Court issued a press release on September 19, 2020, regarding her death, marking the end of an era in the United States Supreme Court. Hundreds among thousands of people showed up at the stairs of the Supreme Court building to honor the late Ruth Bader Ginsburg. She was eulogized as a “rockstar” by Justice John G. Roberts.

Today, our nation mourns the loss of our late Ruth Bader Ginsburg and will continue to mourn as long as her mark remains on this nation. Ginsburg was an exceptional woman who did everything in her power to help the people of the United States and she will always be honored for doing just that.