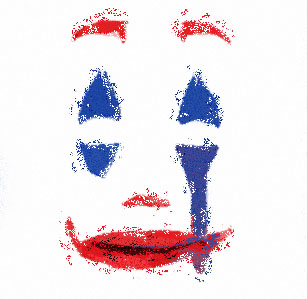 Joker Is Not A Mental Illness Icon

Ripe in this day and age of conversations both good and bad about mental illness, DC released “Joker”— a film which illustrates every crooked twist and turn that made the emphasis Joker who he is as a villain.  The cinematography is beautiful and the story of Arthur’s slow, descending spiral reminds the audience not to ostracize the poor, mentally ill or those in different circumstances as yourself.  That exclusion creates monsters of them and you.

“Joker” is controversial, that cannot be denied.  You either think it’s a wonderful example of what not to do or a terrible monsterization of those affected by a failing system and mental illness, two things they cannot control.  Whatever your opinion, we can agree that the Joker as a villain is crazy— he’s clinically insane— but that there is also a distinct line between loving him as a wonderfully twisted villain, and idolizing him as a mental health icon or something to aspire to be.

His symbol being used by the rioters is separate from who Joker is as a character.  The rebellion and movement in the film mirror’s today’s societies around the globe, as well as economic and political struggles.  They use the clown masks as a symbol of inequality, of an unfairness perpetuated and encouraged by the wealthy class who seemingly rule the city.   These masks are completely evolved from and the exact same as Joker’s original self-defense.  It is a fighting-fire-with-fire strategy that turns Gotham into a filled-to-bursting powder keg ready to explode.

Arthur, however, is nothing within that movement.  His revenge is personal and done in cold blood, from the three Wall Street men to Murray. It can be argued that his murderous intent is a defense of himself and his psyche, but involuntary-turned-voluntary manslaughter and first-degree murder are three separate and severe offenses.

An ideation of murder is not healthy, and has never been nor will ever be healthy.  It is what churns out school shooters by the dozens and causes mass killings in a country ripe with an overabundance of them.  The mentality showcased by “Joker”— the me-against-them perverted underdog mentality— is dangerous.  Sympathy with the devil is needed, but to see the film as anything but a commentary on why situations like these arise and that even originally good people can reach a breaking point with cruelty stacked against them is concerning.  To see the iconic villain as a valid and coping individual for living in a bleak society breeds anger, rage and amasses a cold fury that only Reddit’s community of incels could rival.

Throughout the film, Arthur is trying to cope; he is trying to justify himself and he is so, so scared.  It is heart wrenching.  It makes you think about your neighbors, your peers, your friends and family:  What if they were in these experiences?  What if they needed help and could not get it?  What if they wanted help, wanted to be saved, but could not receive it because the system has utterly failed them?

“Joker” is politically inspiring— not mentally.  It is a commentary on mental illness, on social class morphing into a caste system, on the failure of government concerning those truly in need.  “Joker” is a warning on what could happen, not an idealization or fetishization on something that you should look forward to.