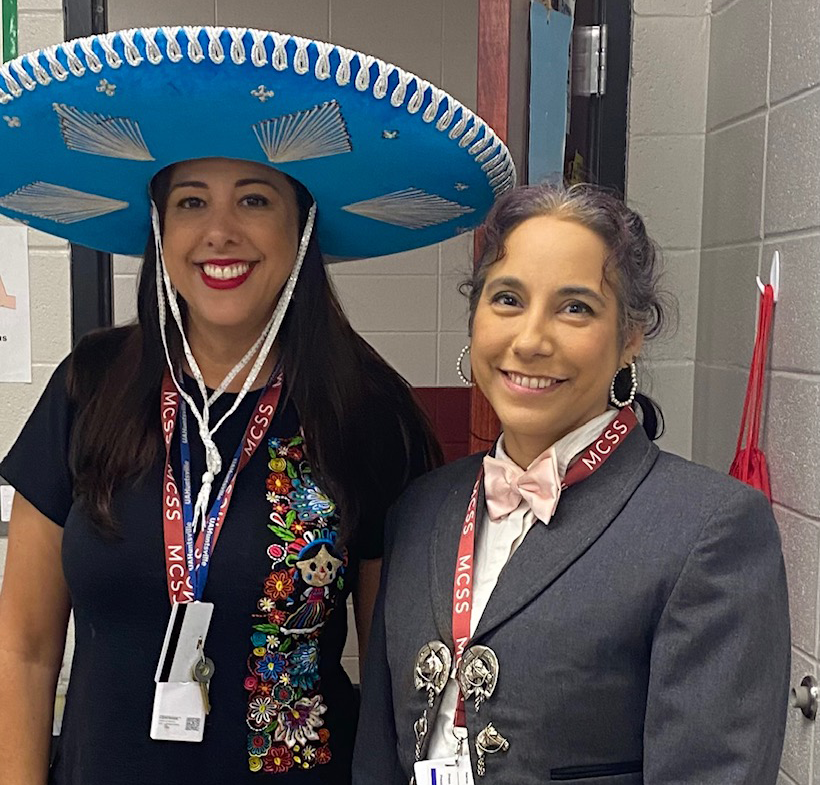 Teachers, Carla Naves Pena and Kyra Espinosa, pose for a quick camera. The two dressed up to show their Hispanic heritage.

The country celebrated Hispanic Heritage Month, Sept. 15 through Oct. 15. Throughout the month the contributions of American citizens whose ancestors have come from Latin countries were honored and celebrated.

It began on Sept 15  because that is the anniversary of independence for Latin countries like Costa Rica, El Salvador, Honduras, Nicaragua, and Guatemala which is important to many Hispanics including some in the school.

“It’s important to me because our Hispanic ancestors have impacted the US in big ways, whether traditions, food, work, they’ve helped build our country from the ground up,” senior Jessire Zayas said. “I come from many groups of people, many indigenous groups, and they all were an important part of history, but the Spaniards, my ancestors, were a big part of US history. My parents came to the US for a better life for themselves, as well as for the family they wanted to create. I always celebrate Hispanic heritage month being most proud of all my family has achieved.”

Zayas feels as though her heritage and culture has helped define who she is. Her mother’s side of the family descends from the Mayan Indians, including the Yucatan Indians and more. Her dad’s side of the family descends from the Spaniards, Taino Indians, Italians and many groups of people in the Caribbean. She feels joy knowing the diversity of her roots and the impact her ancestors had on the world.

“My heritage makes up who I am, and is what I’ve held close to my heart all my life. I’ve been a needle in a haystack, as I was one of very few Hispanics growing up,” Zayas said. “My heritage and where I come from has caused me to experience some indifferences throughout my life, as I wasn’t like the other kids, ending in feeling ashamed of who I was. As I grew up, I learned to embrace the person I am and where I come from, as my culture is what makes me unique. Having a different background is nothing but a blessing.”

Stereotypes and misconceptions about Hispanic culture have an impact on many aspects of Hispanics lives. Zayas is one of the ones that has been affected by it. Stereotypes can hurt and be a setback but that does not stop Zayas from being proud of who she is and where she came from.

“Some of the many Hispanic stereotypes are Hispanics being rapists or killers, lazy, and criminals. These stereotypes have affected me the most at my jobs, as people have called me lazy and a terrible worker because I’m Hispanic, making them feel and say that I don’t belong here,”  Zayas said. “It was hard at first, because people only viewed me as a lazy foreign girl, as well as my family. The stereotypes we face have caused my family to be declined from many opportunities, like housing. As I grew up, I learned to ignore it, and let people think whatever they wanted about me, because at the end of the day, only my opinion about myself matters.”

Even with misconceptions floating around, Zayas still makes sure that her culture is known and celebrated as much as she can. She uses her platforms to spread the word so everyone knows that it is Hispanic Heritage Month.

“There are not many opportunities here in the south to celebrate Hispanic heritage month, but during the month, I like to speak about my culture and heritage more online, and recognize the impacts of my ancestors,” Zayas said. “I make sure others know what’s being celebrated and the importance of it. I think that if we all recognized each other’s cultures more, it would unite us more as a community, and help others look past each other’s differences.”

Science teacher Kyra Espinosa believes that Hispanic Heritage month gives the chance for everyone to learn more about the Hispanic Culture and for it to be celebrated and presented to those that might not have seen it before. Not only is it an opportunity for others to learn about the Hispanic culture but for Hispanics themselves to further their knowledge in some situations.

“My mother was the first in our family to go to college. She faced many challenges in school from language to cultural differences,” Espinosa said. “Since education was so important to her, she wanted to make sure I didn’t face those challenges. So I grew up more western than anyone else in my extended family.  Thus, I use Hispanic heritage month to learn more about my culture while sharing it as well.””

Since Espinosa is a high school teacher she enjoys incorporating a little bit of Hispanic heritage month into her classroom. She likes to bring traditions to life and provide an environment where students can learn a little more about it.

“As a science teacher I need to incorporate more Hispanic scientists into my class day. Currently I use my bell ringer to highlight Hispanic pioneers, like Cesar Chavez, Hispanic NASA engineers and by doing Hispanic Heritage trivia. And to help bring some of the traditions to life I wear my Mariachi outfit, called a Traje, to school,” Espinosa said.

She was once in a mariachi band which is a small Mexican musical ensemble composed of a variety of instruments. She greatly enjoyed her time spent in it.

“Being in the Mariachi band “Corazon De Mariachi” was such an amazing experience,” Espinosa said. “I played trumpet and we got all sorts of gigs from quinceañeras to college graduations. The longest night was always the eve of Mother’s Day where we played one to two songs for moms and so we traveled all around town.”

Espinosa is proud of her heritage and the culture she comes from. She uses these times that allow the opportunity to highlight her culture to the best of her ability and holds them close to her heart.

“I am who I am because of my family. Whether that be called Hispanic, Latino or Chicano my family is different than others. Which is what makes our Country so great-so many different cultures and these months that highlight different cultures allow us to accept all cultures as positive influences in our lives,” Espinosa said