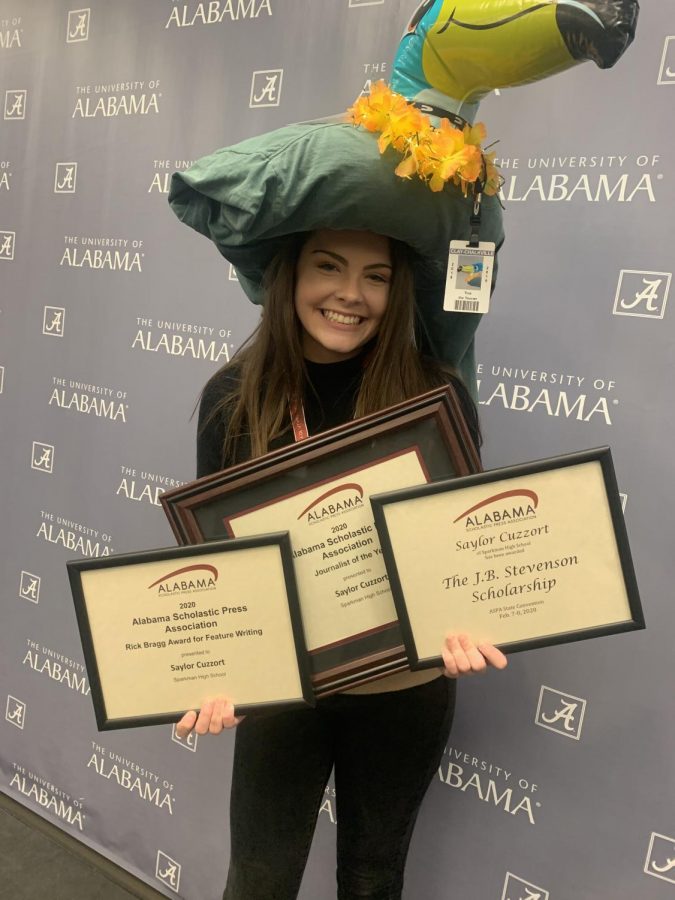 Editor-In-Chief Wins Journalist Of The Year

Friday, Feb. 7 was a day that will always stick out in senior Saylor Cuzzort’s memory. At 5:30 that afternoon, she was named the Alabama Scholastic Press Association’s High School Journalist of the Year.

The awards are considered to be prestigious, and Cuzzort and her mentor, Newspaper advisor Erin Coggins believe she worked very hard to achieve them.

“I also won the Rick Bragg Award for Feature Writing and was awarded the J.B. Stevenson Scholarship for journalism,” Cuzzort said.

Cuzzort has dedicated a lot of time to the Crimson Crier Media over her high school career and feels that being given the titles is a way of proving that all of her hard work has paid off.

“It is not so much the award but what it represents,” Cuzzort said. “It means the world to me that I get to represent Alabama in the national competition  and to be a model to other students in our program that being open to the process comes with incredible outcomes.”

Cuzzort spent weeks building her portfolio online, gathering all of the stories she has written, pages she designed and content she had created. The awards were important to Cuzzort, especially becoming Journalist of the Year because the school has had eight previous winners of the awards.

“Four years is quite a bit of work and dedication. When they called my name for the Rick Bragg Award, it was a sense of relief that four years of pushing myself out of my comfort zone and all the late nights were worth it,” Cuzzort said. “On top of that, last year’s winner from our staff was there to watch.”

Cuzzort being a part of the staff for so long is almost novel, because most join as sophomores after coming from the ninth grade school. At that time, freshmen could join the class, and Cuzzort had the opportunity to join.

“Being one of the youngest members in the class with experienced seniors was extremely intimidating,” Cuzzort said. “I was extremely shy and so unsure of everything I was assigned. Interviewing people I had never met absolutely terrified me and then when writing a story about them I feared no one would like it. Fast forward to senior year and I have met some of the most amazing people just by sitting down to interview them.”

Cuzzort intends on majoring in public relations and political science and the University of Alabama this coming fall. Although she is not majoring in journalism specifically, the writing and communication skills she has developed throughout her time as a student journalist have not only inspired her career choice but have given her a skill set she can use throughout her life in everything she goes on to do.

“The newsroom has such a unique atmosphere with so many different personalities and students from every walk of life,” Cuzzort said. “It is truly amazing to see these reporters come together to produce a publication that the entire student body enjoys.”

For Cuzzort winning, these awards took extreme dedication to student journalism. It meant finding a way to work around the prior review, being open to new ideas, working endlessly to create something engaging and interesting, and always keeping an open ear for new stories. These things are values that Cuzzort holds very high.