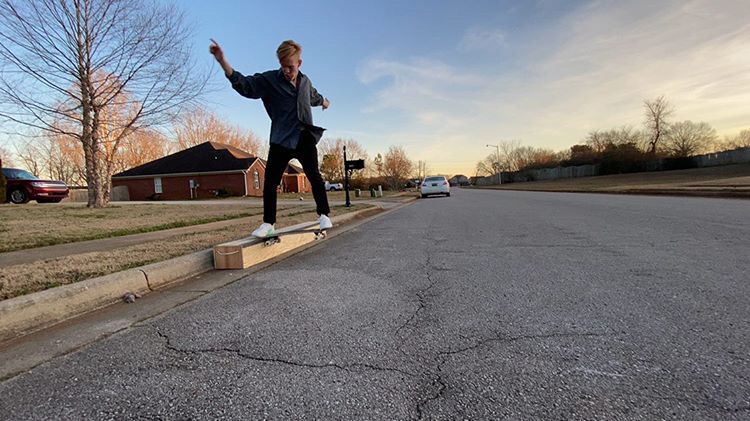 People find outlets to escape the daily routine of their busy life. Hobbies are acquired and can range from a large number of activities. Some more common than others, these two friends found a hobby they both can enjoy together.

Junior Nick Patterson and senior Kaleb Jenkins are friends who have known each other for three years now and continue to grow together with the common interest of skating.

“We met in band camp during the summer,” Patterson said. “I was a freshman and he was a sophomore at the time and we both were playing the bass drum.”

While Jenkins has been skating since 7th grade, Patterson picked up long boarding first as a sophomore. As they grew, Patterson wanted to challenge himself more and learn tricks on a skateboard instead.

Although it did not happen at first, Patterson and Jenkins started skating together outside of school, practicing and learning together. In this, it brought them closer as friends.

“We became closer by encouraging each other to do better,” Jenkins said. “Both of us learn new tricks together and practice the old ones, having fun while doing so.”

Patterson and Jenkins go out skating with a usual routine. As it may seem monotonous, they find ways every time they skate together to bring an exciting aspect to it like a new spot to go to or a new trick to learn.

“We try to go and skate together anytime the sun is out,” Jenkins said. “We look for any good spot that has what we need to pull the trick we want. I personally like downtown Huntsville because I enjoy the street aspect of skating where you do a trick off of whatever is around you. We also go to skate parks for ramps and other inclines.”

Skating has been engraved as such an enjoyable aspect of their daily life and they go have fun with it whenever they can. As far as they know, they plan on doing this as long as their lives let them.

“Skating is something I wanna do as long as I can,” Patterson said. “It is an amazing feeling finally learning a new trick after countless hours of practice and being able to show your friends.”

As time goes on, the two friends busy life may interfere with their hobby but try not to let it interfere.

“I would like to make a future out of skating,” Jenkins said. “I am going into the military though, so I would like to keep doing this as much as I can.”