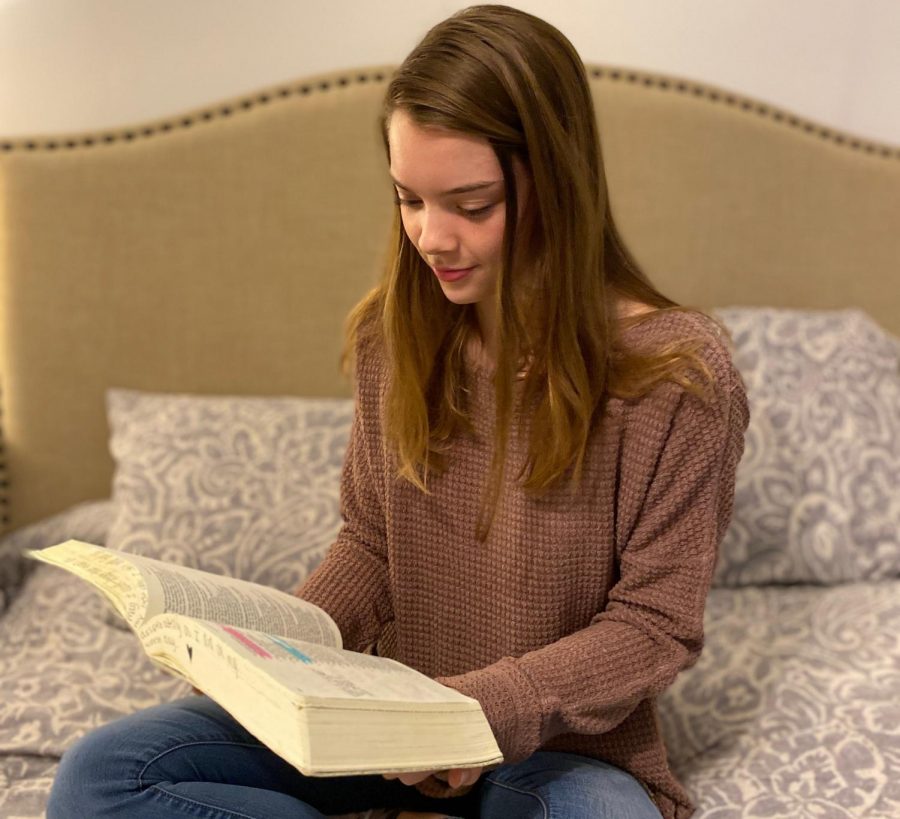 Student Uses Instagram To Spread The Word of Christ

Waking up early on Sunday morning and messing with button up shirts and hair bows, for 49% of  Christians, this is something that has become a routine one to five times a month. Growing up in a Christian household with parents that are both believers in Christ seems like the most apparent way for children to discover their own beliefs.

Hailey Drummond was not raised in this environment, with her parents never finding a church to call home, she found her way to God unusual to the community.

After losing her cousin unexpectedly the summer before freshman year, Drummond struggled deeply to cope. Feeling empty after losing someone close to her, Drummond remembered something about her cousin, his faith. Even after his death, people around her spoke highly of her cousin and the light he was for others spreading his faith every step of the way.

“My cousin was a believer in Christ and before losing him my religion was something I had never thought deeply about,” Drummond said. “This was the first time someone else’s faith impacted me. I think it had even more of an impact because even though his life was over, his spirit and faith still lived on and inspired me.”

Later that summer, invited by a friend Drummond went to a church camp, and was surprised when she became overwhelmed with the amount of love she received. She was reassured that her cousin was being taken care of, there was no more pain or suffering, his demons could not hurt him anymore.

“Church camp that summer turned Christianity into more than religion with rules to be followed, it became a faith that gave me peace during the hard times,” Drummond said. “It became something that, even in the chaos, we can always be at peace knowing God can create a beautiful blessing out of it.”

This past summer Drummond created an account on Instagram called joy.awaits where she uses her platform to reach out to others and spread lessons about things she has learned through her journey in Christ. She turns what she learns from youth ministers and friends into posts with colorful images of bible journaling and song lyrics into a modern way of discipling.

“Most of my content is based off of things that are just heavy on my mind and heart,” Drummond said. “I have had so much positive feedback from people messaging me wanting to talk about their faith and how encouraging it has been to members of my church mentioning how proud they are of me,” Drummond said.

Turning what was a heart wrenching situation into a way to express her love for God Drummond found an outlet to both letting God deeper into her life and helping others do the same. Growing in her faith while inspiring others, Drummond believes no matter how different you are, there is a place for you in God’s heart.

“This account has helped me become more consistent in my relationship with God and I hope for others it has too,” Drummond said. “No matter where you are in life you are never alone and I believe that is apparent in my journey through Christ.”