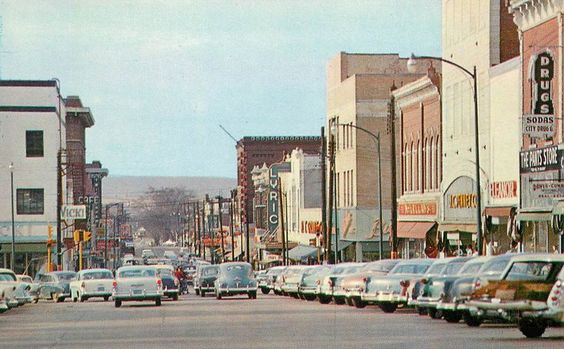 Downtown Huntsville in the 1960s.

Huntsville was just a small town out in the country until it evolved into the booming city it has become today. With its continuous development, it is hard to imagine it without the Saturn IV towering over the progressive city streets.

Mark and Marlene Warren have been local residents for almost their entire lives. Mark was born in Huntsville in 1962 and has been a local resident for all of his 59 years of life. Marlene moved to Huntsville when she was four years old in 1956 and although she moved around after college, she came back to raise her family.

“Although I was born in Pennsylvania, I grew up in Huntsville. It was a great place to grow up,” Marlene said. “All the kids in the neighborhood hung out together because everyone walked to and from school. For entertainment, especially when school was out, there wasn’t too much. We could go watch a movie at the only theatre in town or hang out at the big ballpark that everything kinda revolved around. It was a small, small town, but it grew so big because of all the people moving here to work at the Arsenal.”

Before phones and computers took over, entertainment was left to the imagination. Mark was a country kid who spent his time hanging in trees rather than being stuck to a screen.

“I grew up in Toney after the age of six, which was still very much the ‘country.’ We were only 20 minutes from ‘town’ but it felt like a million miles away,” Mark said. “Trees were everywhere–we used them for climbing and building treehouses, and since we didn’t have many street lights the stars were always visible. There were fishing ponds and woods everywhere, and no one seemed to mind if boys spent their days playing in their woods. Television only had three channels, well, there were four–but the fourth was public television and most folks didn’t watch it very much since nothing on it interested anyone. There were only a handful of shows that could keep our attention. In the summers, if we did our chores, we’d get the privilege of going to Blue Water Springs–the YMCA in Toney with a huge community swimming pool.”

The entertainment options now are nothing compared to before. Especially, with the recent additions of everything in Midcity, Stovehouse and classic Bridgestreet. Although there are many hills and farms that have defied city development, according to Mark, Huntsville is nothing compared to its past small-town self.

“This is truly the stuff of born-and-bred Huntsville area natives. We can’t begin to describe how things used to look compared to today,” Mark said. “Hills have been leveled and new rises created to facilitate roadways. Dangerous intersections replaced with safer, easier to navigate ones. Maybe that’s why I enjoy the places that are still untouched in areas of Huntsville that seem forgotten. It is exciting to see the fields growing houses and commercial buildings–the fields no one was interested in a few decades ago.”

Mark is an alumni of the original Sparkman High School. He attended when it was initially located in what we know as today’s Sparkman Middle School building.

“[Sparkman] in one word–tiny. I believe the entire school had approximately 300 kids. We were in the middle of nowhere,” Mark said. “There was a lot of darkness separating Toney and Huntsville. We were so small that the idea of us competing against a ‘city school’ in sports was unthinkable. There were only three sports: Football, Basketball and Baseball. You’d run to stay in shape for one or all of the three. You’d lift weights only to make you better at one of the three.”

“Growing up in Toney in the 60s, I didn’t seem to think much of anyone’s color. I had friends that were black and white. I knew, of course, that there were differences on many levels but I wanted the friendship of people more than I wanted to note the differences,” Mark said. “I wasn’t sure if it was more important to be liked by everyone or to show everyone that they were liked–part of the good raising of a Southern Christian boy in the 60s–at least for me. I was aware there were fights and protests in other cities but I don’t remember being affected by any. We had an album from 1962 by the comedian Bill Cosby that was a staple of my childhood. We watched sitcoms that were both based on whites and sitcoms based on blacks. We played sports with anyone of any color. I don’t remember a single negative incident concerning racism. As trite as this may sound, my friends were both white and black. I just don’t remember caring about race.”

Although that is just one side of the story, Mark’s indifference kept him from having any outdated beliefs. Although the transition appeared smooth, his grandmother had a difficult time adjusting to the changes like many others of her generation.

“My grandmother, who was also raised in the Huntsville area, took exception to my black friends. She even used the ‘N word’ and I remember having words with her about it,” Mark said. “It probably fueled my love for my black friends even more because of her attitude. I remember eventually coming to a peace about it with her. Later in my teens and beyond, we didn’t speak of it anymore.”

Marlene, who is almost a decade older than Mark, did not experience school integration until middle school, but saw the effects of segregation as a little girl.

“When I was just a little girl, no older than 10, I remember seeing labels for water fountains and restrooms. I kind of understood what they meant, but I never understood why,” Marlene said. “People are not born naturally alienating others for simply the color of their skin, but the beliefs are developed over time. One incident that really got me asking questions, was when I was just 9-years-old crossing the road with my dad. Across the street I saw Alice, a Black maid who worked for us, crossing the street as well. I waved and called her name but she acted like I was invisible, even when I was right next to her, passing her on the crosswalk. When I was so upset that she didn’t speak to me, my dad told me that Alice wasn’t ignoring me. He said, ‘She was protecting you. There are a lot of unkind people who don’t think black and white people should associate in public. She didn’t want to be unkind to you for socializing with her in a setting (downtown) where mostly white people are shopping’.”

Reflecting on her past, Marlene is thankful she did not have any worse encounters with racism or riots. She considers herself blessed with parents who understood the evil of racism and did everything they could to ensure she did too.

“My dad taught us to never be disrespectful to anyone, regardless of color, don’t be disrespectful. This included the fact that we were never to say the ‘N word’,” Marlene said. “It was only later in my life that I realized his compassion towards blacks was probably greatly influenced by his time fighting in WWll. My dad was a German, ashamed of his heritage, because he saw the horrors of what was being done to people for just being Jewish. He had a deep understanding of the awful torture and mistreatment people received just for being black.”

Since then, Huntsville has matured and grown into such a diverse place. The Redstone Arsenal seems to be the core of Huntsville and continues to attract people from all over.

“We had to live in Decatur while they built our house. Even then, so many people were moving to Huntsville at the time,” Marlene said. “The Arsenal was hiring a lot of civil servants and programs were expanding. I remember during the Cuban Missile Crisis my dad wouldn’t come home and would have to stay at work.”

Growing up, Mark remembers seeing the name Joe Davis everywhere. According to his folks, Davis was the mayor that brought in so much business development.

“Redstone Arsenal was always a mystery–what was happening there and how much secrecy shrouded the place,” Mark said. “It was the developments of the Army that involved missiles and rocket engine testing. That’s all we knew but that’s all we needed to know. My parents knew people associated with the Arsenal  but it didn’t matter much to me–there was however, the new frontier of space that was being reached–when I was seven years old, we landed on the moon.  It was the greatest achievement of all time, it seemed. We were very aware that Huntsville had played a big part in that success. My brother and I were destined to be astronauts. We studied everything we could about space travel and NASA.”

The Arsenal continues to bring in more people and more business. The numbers from the 2021 census seem to hold shocking results and predictions.

“It’s surprising to me. I haven’t expected us to continue to grow as we have. I do hope we can continue to grow industries beyond the Department of Defense, yet I’m thankful that being a city that’s heavily dependent on government appropriated funding, that we are closer to ‘recession proof’ than many other cities–I do not take that for granted,” Mark said. “I understand the predictions are very positive for the growth of Huntsville and it makes sense based on what this area can offer to people willing to relocate. I take a lot of pride in knowing how well the school systems are doing, the neighborhoods are growing and the people are more diverse with each surge of new employees relocating.”

Mark is proud of what Huntsville has become and is excited to see what the new flood of people brings. He hopes they take the time to appreciate the beautiful not-so-small town that he calls home.

“This is home. That’s it. One of the world’s most educated cities (per capita, that is), high-tech jobs, where we have UAH, UA&M, Oakwood University and the community college. Some of the best choices in education and employment are here,” Mark said. “It is a diverse and interesting population of so many people groups. No one’s really from here (my wife and I are exceptions, I realize) and that enriches the population with so many perspectives, experiences and ways of life–all good.”