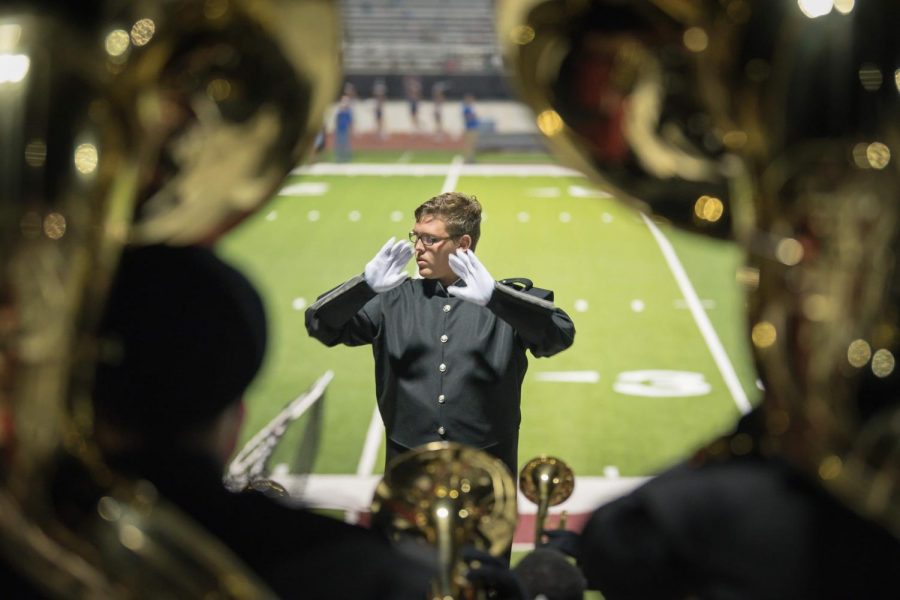 Leading the marching band at the game against Decatur, sophomore Kaden Burgess gets his first taste of directing music.

Music filling the stadium, band members moving in step to the beat of the drum, color guard putting on a show with a smile, a crowd of people cheering everyone on. All these things go into a great marching show, but there is one thing that can go overlooked in all this. Without the help of drum majors, there would be no way for the band to know when to start or even what tempo to perform in.

This can be said in the case of sophomore drum major, Kaden Burgess. Little did Burgess know when starting band in the sixth grade, that he would rise to the most important position in any band.

“I joined band because I saw many of my older friends doing it and I thought it would be a fun thing to do,” Burgess said.

After seeing how well his neighbor played the trumpet, Burgess decided to follow in his footsteps and play the same thing. After seeing marching show and the drum majors, he knew instantly that he wanted to be in that position one day. However, knowing that it took a lot of hard work and dedication, Burgess was prepared to face all of it head on.

When getting to high school Burgess had many changes to adapt too, but never lost his dream of being a drum major. While going from middle school band to high school band was drastic change, Burgess took the changes knowing in the long run he would be doing something that he would love for the rest of his life. Burgess favorite memory from his first year in the marching band is the feeling he got from performing to the roaring crowd during have time and knows that it is an experience he will never forget, nor trade for anything in the world.

“I learned that I have to have good time management skills during my first year of band,” said Burgess. “At the beginning of the year, I committed to band and theatre, and that was a struggle between rehearsals for the both of them.”

After being able to see all the work the current drum majors had to put in during practices and camps, Burgess knew he had to hone in those time management skills if he ever wanted to be in their position. Because theater and band can conflict, Burgess took it upon himself to find a way to fix his problem. After talking to his theater director, he found a simple solution to be able to participate in two things he enjoyed. While found this solution difficult at first, it soon became his second nature. After his band practices he went straight to his theater rehearsal and was always ready to put in the work no matter how tired he was at the end of the day.

Even though he had a successful first season. Burgess never gave up on the dream of being a drum major. So, at the end of his freshman year when audition dates were announced for the position, he was ready to everything he could in hopes of accomplishing his dream.

“The audition consists of a prepared piece, conducting with different styles, different time signatures, different tempos, giving verbal commands like calling the band to attention, writing an essay and an interview with all three of the band directors.”

While he did his best, Burgess knew that it was not guaranteed that he would be chosen. Even with this uncertainty he remained confident and positive and did not let his nerves get to him. Burgess credits his mother for helping him remain positive. Being his biggest supporter, Burgess knew that he would have someone to push him to keep going no matter how nervous or discouraged he could get. He also gives credit to former drum major Josiah Drake, and current drum major Jamie Douglas and Erin Eurton for helping him through the entire process. He feels that without there friendship, encouragement and help he would have had a harder time at the auditions.

While he felt that he had extremely tough competition for the spot, he never lost any hope in himself. On May 4th, 2019, after five years of working hard at playing the trumpet and going through the audition process, Burgess finally saw his hard work pay off.

“So, when Mr. Raney sent out the list of drum majors, my phone was actually charging in my room while I went to get a popsicle, banana flavored in fact,” Burgess said.  “Then I went back to my room and saw the text message, and I may or may not have let out a very loud scream. It’s safe to say I was very excited.”

With that text message being sent, Burgess was bombarded with messages from friends and other band members who had seen the results. While he did not celebrate the more than huge accomplishment, he did take time to appreciate all the support he got from everyone around him. He also made sure to thank everyone who congratulated him and those who helped him accomplish his dream.

Even though he had accomplished his dream, Burgess still had a long way to go before he could truly say he was a drum major.

“I had way more responsibilities this season than I did last season,” Burgess said.  “I was at rehearsals much early and later than I ever was last year, and I had to get used to people asking me a lot of questions and being relied on for daily operations of the band.”

Before band camp began during the summer, Burgess attended a leadership camp at the University of Alabama that was required for him because he was a new drum major. Lasting two days, it helped prepare him for what would come in his new job. While he did learn important and valuable leadership skills during the two day, he feels the most important thing he learned was that he had to be willing to fail in order to succeed. He also learned how important is was to set a good example for those apart of the program, especially those who would be entering their first year in the program.

While during his freshman year of band Burgess had very few responsibilities, this year he has had to adapt to more than just people asking him the same thing over and over again. His new responsibilities include things such as taking attendance or conducting the band at games and competitions. Although, Burgess does sometimes miss the simplicity that comes with being a regular band student, but only feels this when he gets asked too many questions in a day. He also at the beginning of the season dreaded the thought of coming home after midnight from away games and competitions, but now wishes he had more of those nights to enjoy this season and cannot wait to enjoy more next season. Burgess has also enjoyed seeing his friendships with senior drum majors Jamie Douglas and Erin Eurton flourish through the 2019 season.

“Being a drum major 100 percent changed my relationship with Jamie and Erin.” Burgess said. “Before I became a drum major, we were just acquaintances that talked every once in a while, but now I consider them some of my best friends.”

Burgess feels that the relationship between himself and the senior drum majors is one that is very joking, friendly, caring and helpful. Whether they are joking around with each other or getting caught up on things they need to get done, he always enjoys having there company. His fondest memory of their friendship thus far is one that came during band camp.

After getting sick during competition band camp, both Douglas and Eurton made sure to take care of there friend and continuously check up on him for the rest of the day even though he was able to resume his duties after lunch. He feels like time like show him how much they care and how much they want to see him succeed, and he knows he will always cherish their guidance and friendship for the rest of his life. He also knows that he will miss them both when they graduate and will do is best no matter what thrown at him just like they always have.

“My first year as a drum major was honestly one of the best times of my life,” Burgess said. “It provided me with fun, rewarding and amazing times and I cannot wait to see where it takes me.”

With his first marching season as drum major finished, Burgess already looks forward to the next year and plan to audition for the position for the rest of high school. Even though he will miss this season, Burgess made sure to make as many memories as possible that he can always look back on. His most fondest of memories this season being award ceremonies because he got to see everyone’s hard work pay off, including his own.

While Burgess knows he must audition for the position again next year and is not guaranteed the spot, he is going to do his best in hopes of keeping the position for the rest of high school. Burgess feels that he definitely helped “rewrite the stars” with the band and is excited to see what will be accomplished next.

“Being a drum major is something that is highly important to me,” Burgess said.  “It is something that I will never take for granted because I know how many people wanted the position I have. I have enjoyed every moment of this job and I will always be grateful that the band directors saw something good enough in me to put here.”