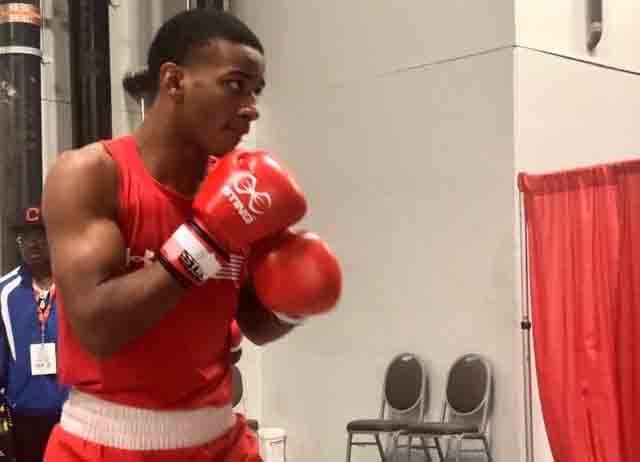 Junior Hopes to Pound His Way to the Olympics

Junior Hopes to Pound His Way to the Olympics

While most boys in high school choose to play sports for the school, that cannot be said in the case of  junior Obed Bartee. Bartee instead has decided to indulge in the sport of boxing.

Going into this, Bartee had an open mind, which led to him develop a love for the sport.

“I didn’t have a real reason to start boxing,” Bartee said. “My dad just felt that football was boring and wanting me to do something different.”

While most people find it weird that someone at his age boxes, Barteer knows that deciding to fight is one of the best choices he has made thus far in his life. Although he does sometimes feel like no one is around to understand what he does and often feels that people misunderstand his passion.

“Boxing is something that most people just see as fighting, when it’s so much more,” Bartee said. “Anybody can fight, but boxing takes a whole lot more. You have to have the upper body, the mental stability, the ability to think under pressure among other things.”

Bartee sticks to a strict training schedule to ensure he is also fighting at his best. When the school day ends, his hours of training begins. The first the Bartee does is eat one of pre-prep meals which can consist of chicken, lots of greens, fruits ,protein shakes and rice.

From here he takes around an hour to rest from his day, enjoying to spend time talking to his girlfriend or just sleeping. After his hour-long break, he goes straight to practice. Here he does cardio for his warm up, then six rounds of intense bag work(practicing things he needs to work on from his last fight or certain combinations of punches) and a conditioning circuit which can include push-ups, jumping jacks, and other common workouts.

“I was ranked number one in the country last year and competed in the 2018 Junior Olympics,” Bartee said. “This December I am going to compete in the Open Championships and hope to become a member of the youth olympic team.”

Along with these things, Bartee has more accomplishments including the 2019 Eastern Regional Champion for youth males, ranking in three different weight classes in 2018, 2016-2018 Southeastern Association Champion, 2018 Junior Olympic National Champion with a gold medal and many many more.

Like everyone who plays sports, Barteer also has someone to look up to.

“I personally look up to Andre Ward when it comes to professional boxing,” Barteer said. “I enjoy watching the way he fights and that he does not lose. He also does not get hurt, and the whole point of boxing is to not get hurt.”

While he does look up to the boxer, he does not aspire to be just like him. He strives to be better than the people that come before him and be the best of the people he gets to fight with.

Bartee knows that as long as he stays consistent in his training, he will be able to do anything he chooses. While he feels he has a long road of wins and possibly losses ahead of him, he is ready to face those challenges head on.

“Boxing in the olympics is my biggest dream and I know it is going to happen,” Barteer said. “I am willing to put in the work to make it happen and it is what I have spent my life working for. All I have to do is wait to make it.”