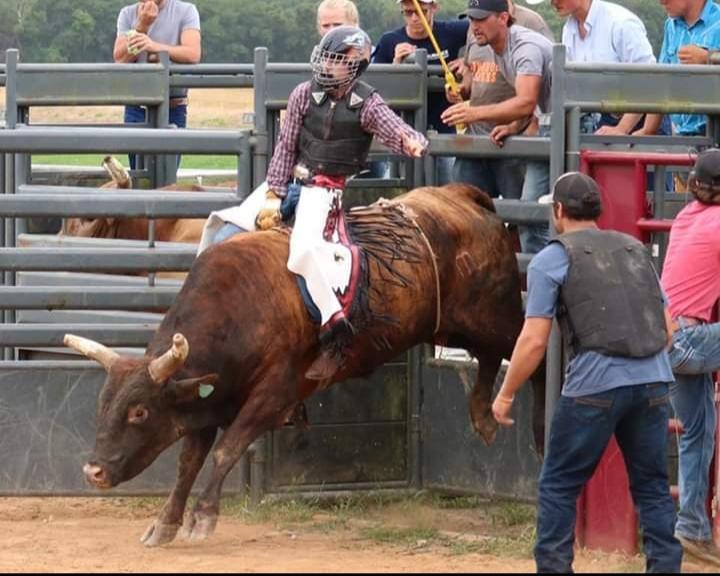 People yelling, bulls snorting and a quick prayer to get mentally prepared. This is what senior bull rider James Pitts goes through before he gets on the bull.

Pitts found out about bull riding when he was a little kid and fell in love with it, knowing that is what he wanted to do. He started bull riding over the summer when him and his dad found out about the Alabama High School Rodeo Association (AHSRA), and signed him up.

“When I was little Marty, my dad, had a friend who was a bull rider and decided to take me and my sister to our first rodeo as soon as I saw the bull riding I fell in love with it and I knew that I wanted to be a bull rider,” Pitts said

Bull riding is considered one of the most if not the most dangerous sport, with the rider having to stay on the bull for eight seconds. Pitts knows that the sport comes with risks and pain, but he loves it anyway.

“It’s called the longest eight seconds in sports, the most dangerous sport on dirt and the grandfather of extreme sports,” Pitts said. “I personally enjoy the pure adrenaline Rush that you get when you tie your hand to a 2000 pound animal that can kill you and when you nod your head and they open that chute gate and it is a fight between man and beast.”

Pitts says a right mind is needed to be successful in the sport. He gets nervous, especially right before he gets on the back of the bull. He also worries about his competitors.

“We have to put it out of our minds and get ourselves pumped up for the ride so when I get ready for my event I listen to music and to get mentally and physically prepared for my ride,” Pitts said, “I also say a prayer for me and the other bull riders along with the bull so no one will get hurt in the process because if we start thinking about what might happen and let that really get into our heads that’s when bad things happen in our rides and people get hurt,”

Because riders work with unpredictable animals, they must be prepared for anything. Pitts said he has to be agile, have good balance and let his body react to the bull.

“These animals control the way they want to go, how hard they buck, where they turn, how they turn and so many other things that you can’t always prepare for unlike team sports were you can always practice and get a feel of what they might do well yes we only have to be on for eight seconds and people at her estimate that it is not nearly as easy as it looks,” Pitts said

Bull riding is an unpredictable sport the rider or unable to do anything but hold on and move with the bucking bull. The riders can’t allow the anxiety and doubt to get into their minds before they get on the bull because that is when they mess up. Pitts tells younger people that the pain is worth it if it is really something that you want to do and if it is your dream, follow it.

“Pain is a part of life and the sport so why not do it in a fun way that will honestly gave you a whole new respect for these animals and a new outlook on life,” Pitts said