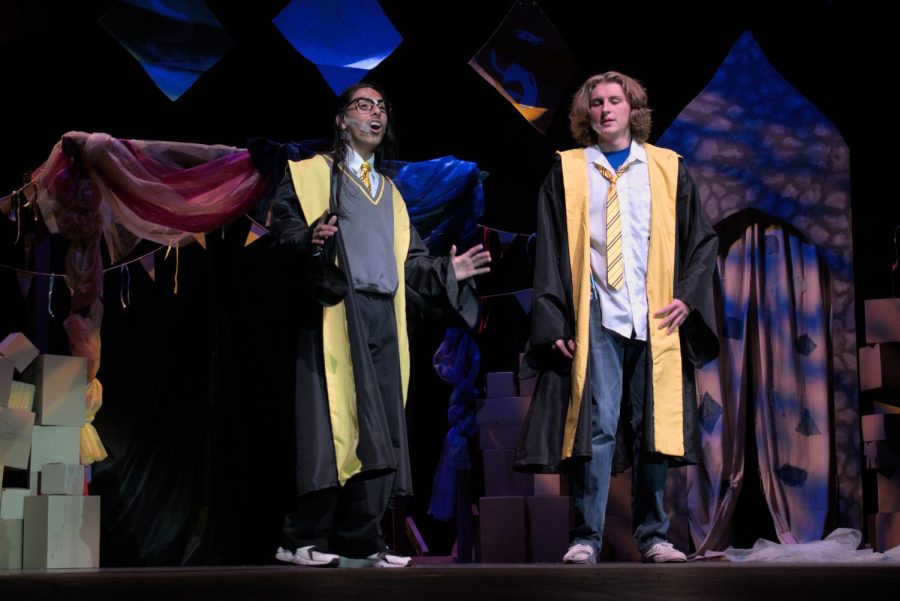 Puffs, a new perspective of the infamous Harry Potter story, focuses on the three main characters Wayne, Oliver and Megan in their journey through the seven years of Hogwarts from the Hufflepuffs perspective. Wayne, a regular boy, finds out he’s a wizard and is sorted into Hufflepuff along with his friends and together they all survive through the seven interesting years at the school of magic for 90-ish minutes.

The show has a few adult jokes that may go over some heads but overall is filled with a ton of laughs and tons of audience participation, including the narrator, played by junior MJ Turner, throwing Hershey Kisses and tissues into the audience. I could do nothing but hold my stomach and wipe my tears as every school year rolled by.

Junior Hunter Alexander, who plays Wayne, does a great job at charming the audience while telling a story. He makes his character realistic and relatable and easily pulls an emotional response from the audience towards the end of the show.

Senior Amy Stafford, who played Cedric, the heart stopper of Hufflepuff and my personal favorite character, did wonderful at charming the audience and made me feel like I was one of the school girls crushing over Cedric.

Junior Isabelle Berube, who plays Voldemort, did nothing but make me laugh throughout her entire performance. In Voldemort’s little section of the show, Berube portrays Voldemort in a comedic light and does a great job at engaging with the audience while still putting on a show.

Though I name these specific actors, every actor throughout the show did a wonderful job of engaging with the audience, interacting with one another and overall making one of the best performances I have seen in the school’s theatre’s history.