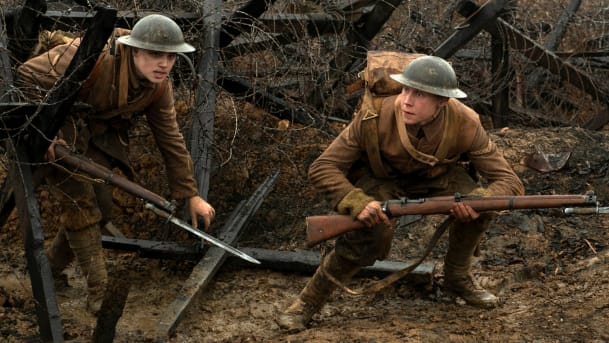 The movie, 1917, follows two British soldiers during World War I.

War Movies Can Teach Us Alot About War

As time progresses, the number of war veterans is dwindling. In 2011, the last surviving World War 1 veteran passed away. According to the National World War II Museum, less than 400 hundred thousand out of an original 16 million World War 2 veterans are still alive. Only one-third of Vietnam veterans remain. Soon, there will be no veterans left to tell people about their remarkable experience in combat.

In 2017, Director Christopher Nolan released the movie “Dunkirk.” In 2019, “D-Day,” “Midway,” and “1917” were all released. Each movie earned a critical reception and massive box office numbers. World War 2 veterans across the country agreed the movies were historically accurate, and should be seen by the public.

“I thought I could see my old friends again,” 97-year-old Dunkirk veteran Ken Sturdy said. “I never thought I would see that again. It was just like I was there again.”

Unfortunately, future generations won’t be able to meet World War veterans like people can now. They will be forced to learn through books and teachers, never knowing the intimate horrors of fighting in a world war.

Seeing “1917” in theaters, I didn’t know what to expect. I came into the movie thinking I knew a lot about trench warfare, but I was far from the truth. Following the two British soldiers throughout the movie made me feel like I was part of the war. I was delighted by the movie, and I felt like I learned a plethora of information.

If people watched more war movies, the public would become much more educated on former US conflicts. Understanding the past could prevent future wars. Respect for our fallen soldiers and veterans would rise, and people would sincerely grasp how valuable freedom is.

My proposition is making these movies free. US citizens need to be educated on America’s involvement in the two greatest wars in human history. It is the government’s obligation to do so.