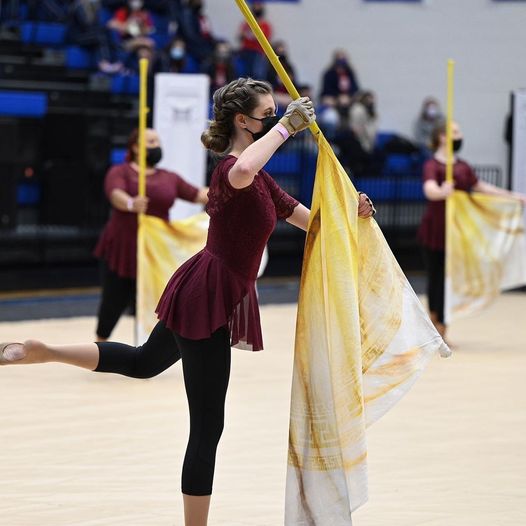 Members of the winter guard show case their routine at a recent competition.

Even though the Winter Guard had planned to compete in three competitions, they still were able to participate in two, kicking this season off with two very well-performed competitions, ranking them high in performance and skill.

The team performed its first competition on Feb.  6 where they were rewarded with a score of 66.60 (3.34 points ahead of second) and the recognition of first place.

“Our first competition was kinda stressful just trying to figure out how everything was gonna work since this year is so different,” junior Cassidy Pratt said. “When we heard our score it was such a nerve-racking experience because just like everyone else, we work really hard in our show and we obviously want to do the best we can!”

The second competition was arranged for Feb. 20, but unfortunately was canceled due to an ice storm. Senior Faith Winn gives an insight into how she felt when she heard they would not be performing that day.

“I was pretty disappointed that we didn’t get to compete at the second competition. Since covid canceled our season last year, I was really looking forward to competing at every competition we were scheduled to perform at,” Winn said. “Though I’m disappointed we didn’t compete in it, I think it was a good decision since we were unable to practice that entire week.”

The team was able to perform its third and most recent competition on March 6, where they received a score of 78.82 (1 point behind first place) and placed second.

Taking part in any performance takes time and repetitive practice. The Winter Guard applies what they have been practicing and further learns to act upon what is necessary in order to make the performance as exciting and flawless as possible.

“I prepare by making sure I can do all my skills and tricks when it counts. I practice hair and makeup and skills a person in color guard needs to have such as having an open mind and knowing we are a team,” Pratt said. “It isn’t about you personally and sometimes you do stuff just to better the team.”

Pratt enjoys being a part of the team and takes to heart her memories she will continue to carry with her.
“I have made amazing memories with my friends that I am so lucky to have gotten to experience,” Pratt said. “I have so many pictures that I will cherish forever even if this year isn’t what I am used to.”
Most upcoming winter guard performers would enjoy a solid piece of advice from an experienced competitor. As a senior having experience in color guard for four years, Winn inspires impressionable students to reveal their artistic talents through the performing arts.

“Some advice I would give some upcoming Winter Guard performers would be to number one, don’t panic when it comes time to perform. Just take a deep breath and remember the feedback you may have gotten and apply that to your performance,” Winn said. “Also, don’t be afraid to try new things! It may be scary at first but once you get it, it will be worth it.”