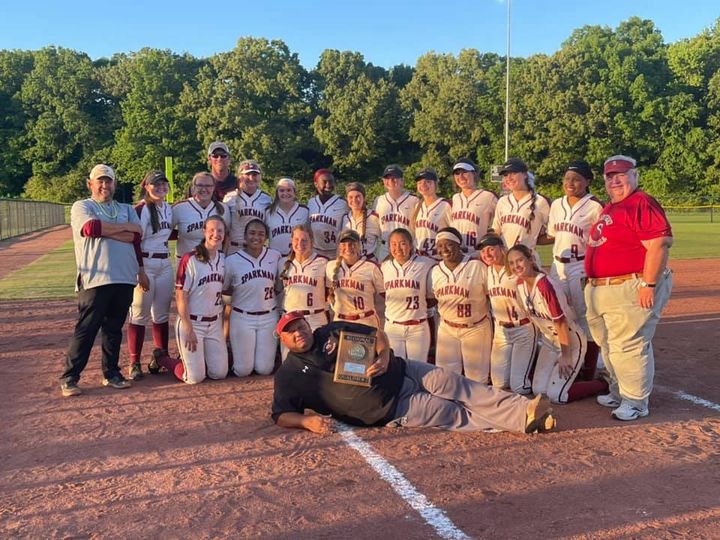 Coach Dale Palmer lays it down for his team in a photograph, capturing their area title trophy.

The first and only fastpitch softball coach, Dale Palmer, is retiring after 20 years with the Senators. Yet, that doesn’t mean that his career has to fizzle out. He’s ending his career going for it all in the state championship playoffs. After an astounding 1,058-311 record, six state championships and five runner-up titles; Palmer will leave the program. With the last title being a runner-up in 2019, the team is in a great spot to continue the winning legacy he leaves behind.

“I have two grandchildren, that’s the main reason why I am retiring,” Palmer said. “I am occupied from the last week of January to the first weekend of June, so it makes it difficult to find time for my family.”

Making it to the state playoffs during a crazy year of COVID restrictions may have been stressful enough, but with the added pressure of every game being potentially Palmer’s last, he tried his best to keep his player’s emotions in check.

“Emotions are just information, not instruction,” Palmer said. “I wanted them to play one game at a time, one at-bat, one flyball; we made it where we want to be.”

“That’s pretty doggone good in varsity competition, being able to have a huge majority of players achieve such a high level of success. Some teams I’ve had were physically gifted but sometimes couldn’t put the pieces together. Other times, some groups slacked off and lost the potential that they had,” Palmer said. “This year’s group has been the most consistent and all-around put together I have had the pleasure of coaching ever.”

The run at the state championship started with a  6-5 loss to Hoover, an 11-4 win over Baker, but  the Senators ended their season with an 10-6  loss against Fairhope. Palmer ended his season with his main goals in mind–leaving the program in good shape.

“I don’t want to leave and have people think I left because the ‘cupboard is bare’,” Palmer said. “The team is in prime shape to go back next year and dominate the competition.”