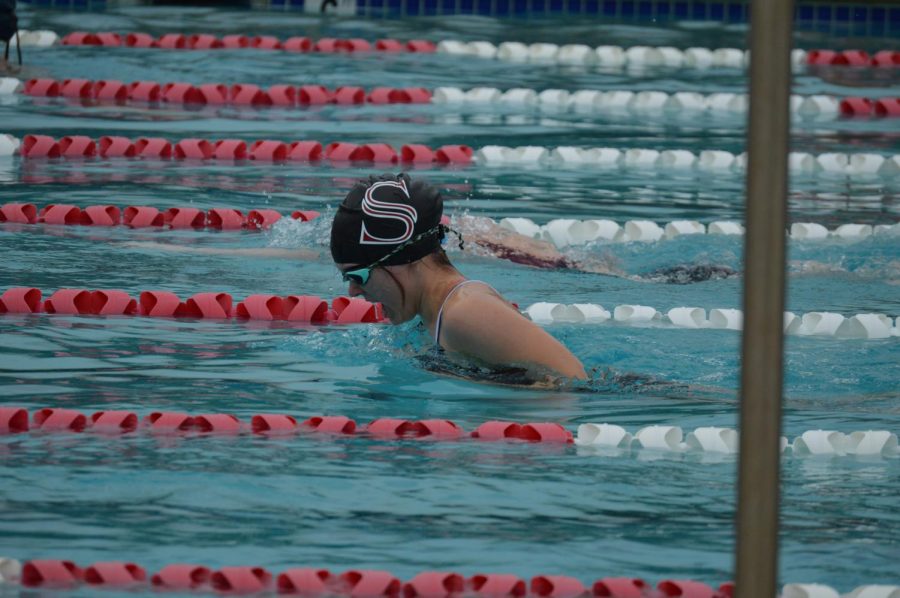 Competing in the breast stroke, senior Emily Hammer rises to take a breath.

In her years of high school swimming, senior Emily Hammer knows that 2020 has been the toughest yet.

“I think I did. Things were crazy, but I had a lot of fun swimming with the team, and I really feel like I improved,” Hammer said.

Hammer believes that she completed this year on a good note and that she improved greatly. She enjoyed swimming with her team and improving in what she does, even though they faced challenges this year.

“We started the season in an outdoor pool, which we usually don’t do because of the weather,” Hammer said. “We also had a lot less spectators, and they cancelled the sectional swim meet. This was also the first year that we didn’t have enough girls to make a relay.”

Facing different circumstances during the season has left the swim team a little devastated. Along with the weather and spectators cancelling events for the team, it has played a huge difference in how this team reacts to these certain changes of this season.

“We actually performed really well at the last two meets, and a lot of us improved our times and finished in the top 5 or 10 in some events,” Hammer said.

Working hard together as a team has benefited the team a lot. From improving scores and has shown how much they have finished strong. Hammer is proud of her team’s accomplishments and hard work this year also she has been very supportive in giving them congrats on the ways they have improved.

Seniors have played a huge part in helping and motivating younger swimmers. They have continued to support the team and the coach by assisting the new swimmers and making sure they understand the benefits of improving their skills. Younger have shown great improvement with state qualifying times through the help of encouraging spirits and support from team members.

“Our coach worked really hard to find pools for us to practice at and schedule our meets,” Hammer said. “Meets were different, and there weren’t as many as usual, but she kept a good attitude and was willing to learn.”

Emily describes her new coach as being determined to do whatever she can to make sure the team has what they need to improve. Even though the team has struggled with finding areas to practice, she has made it possible. With her keeping a positive attitude it has changed the perspective of the whole situation.

“It was hard to focus on swimming with everything else going on, but I wanted to make the most of the season, and it really helped to have so many encouraging teammates,” Hammer said.