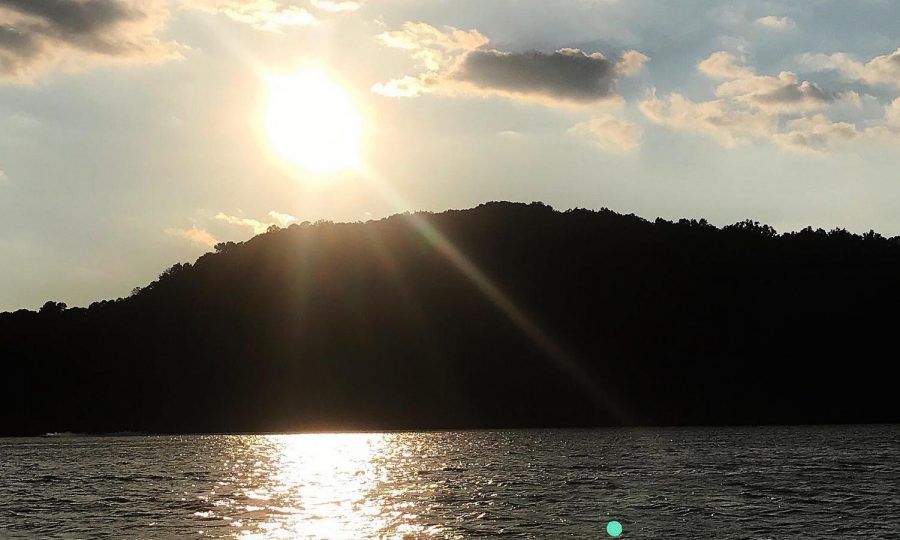 Sophomore Makayla Barchett captures the sun setting over the lake.

Student Finds Bravery At The Lake

High. Higher than I had been in a long time. Nervous too. That feeling in the pit of your stomach that floods your nerves as if you were on a roller coaster and about to go downhill from there. Yeah, believe me. It is not something easy especially when you are thinking of all the bad outcomes that could come from jumping off twenty-five-foot rocks in the middle of a lake. Do not even get me started on how many people were watching. Feeling rushed didn’t help the situation one bit.

It was a day on the lake. My parents, my five siblings, and I decided to get out a bit since life in quarantine was taking longer than what we had hoped. Let me tell you, it was beautiful! The water on my skin as I dove in every direction made me realize how much playing in the hose was nothing compared to be submerged in water. I loved it! Every minute of it! I needed this. Away from home, away from the urge to keep a distance from everyone, and just being able to feel free from the troubles of life.

After we had finished eating on the boat, we decided to cruise around.

“Y’all, look at that!” I remember my dad shouting over the sounds of the water beating the sides of the boat.

There they were, the twenty-five-foot rocks. My eyes lit up in amazement. People were jumping off and I even saw some do backflips. I wanted to do it.

My two brothers and I were the only ones to jump off the boat and head toward the rocks.

The climb up put me on edge. I went to grab the rope, but you had to be careful of the people up top who too were holding onto it to keep their balance. At last, I am able to pull myself up, but with my luck, I nearly slip on the rocks. People climbing up made the rocks slicker and slicker, so by the time I had reached the middle, I froze.

I could not just walk across. The rocks were wet and the feeling of slipping and falling crossed my mind plenty of times. The rope was on the other side, so I had to hold onto the rocks behind me and the rock under me seemed so narrow to cross. Eventually, with a little motivation from others to keep going and showing me how to do it, I made it to the rope on the other side and climbed my way up to the next rock.

There I was, looking down at the water below, and saw my family on the boat who took their phones out to video me. Trust me. Their storage would have been full had they kept videoing the whole time I was up there. I was terrified, and one of my brothers said they would jump if I did. I wanted to do it. I knew that if I did not, I would regret it, but it was just so high up. The thing is, I love roller coasters and I had done something like this in May, but at the moment, I did not care. I just kept thinking of all the bad things that could happen, like not being able to swim back up because you sunk too far, or landing in the water wrong and breaking your spine, stuff like that. I know. Sometimes I overthink things, but in the end, I usually do it anyway.

Butterflies swarming in my stomach, I look down in the water one last time.

The drop felt long and the stomach feeling was times ten by now, but when I hit the water, I came up so alive and proud of myself. Cheering from my family’s boat as well as other boats had lifted my spirits even more. I look up at the drop and see my brother standing there.

Towards the end of the day, I decided I wanted to do the taller one with my other brother, but that is another story for another day.