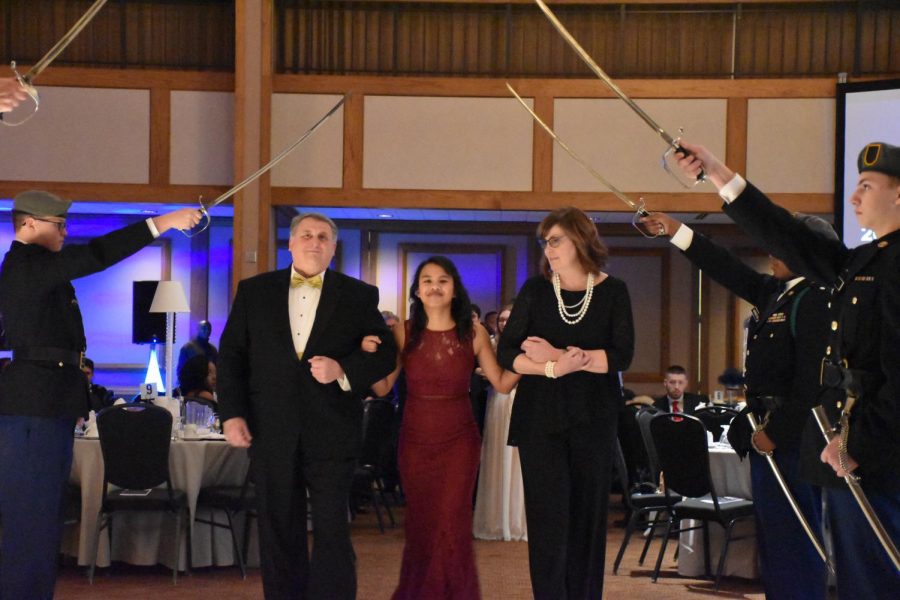 Every year at the event the ball will have motivational speakers to speak to all the cadets who attend. McCaulley has enjoyed seeing how his experience in JROTC has made this ball rewarding.

“I like it because we get to dance. It really hasn’t been different except for the DJ other than that nothing really changes. And that’s what I like about it, you just go to have a good time,” McCaulley said.

When COVID first hit, the JROTC program was impacted and had to postpone the ball during McCaulley’s junior year. During this season the normalcy was changed as COVID cases rose and the program had to cancel their annual event.

“I did feel bad about it. And we were hoping we could still have it, but it never happened,” McCaulley said.

At the end of the ball, the Honor Guard comes in and they have a display of the colors which is done in respect of the American flag. The Savor Team will bring in swords to give honors to the flag as well. During preparation cadets must prepare by training for proper etiquette. Everyone must pass the etiquette test in order to attend.

During the ball, special guests from all branches of the military would come to recruit cadets for the army. Students from other schools also came to attend the annual ball. McCaulley believes he enjoyed seeing cadets from other schools come together to celebrate JROTC.

“We ate and danced. And I think looking at how far you’ve come was rewarding. It’s just like walking across the stage when you graduate you remember it for the rest of your life,” McCaulley said.

McCaulley remembers his sophomore year growing in the JROTC program and becoming a senior. McCaulley uses his journey to encourage those just now joining the program.

“The military ball is important because of the new people. I love to see how much they are growing and all the things they have going on for them,” McCaulley said.

Seniors who attend the ball are given their own special guest to come and speak to them. During the ball a slideshow is shown for the seniors showing their growth from childhood to joining the program.

“Seniors get treated like royalty,” McCaulley said. ”Our guest speakers come and motivate us on our futures and inspire us in becoming future leaders in the military. I really enjoyed it.”