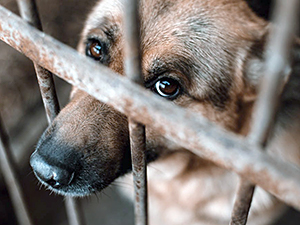 Pictures like these grace late night TV, pleading for people to take notice of animal cruelty and to fight to stop it.

In the United States, while there are laws against animal cruelty, there are still many people who have hatred for some dogs breeds, and take that hatred to another level.

When juniors Macie Bredson and Azlyn Miller helped a pit bull puppy find his forever home with a loving family in Birmingham, they believed that puppy- named Cash- would live a good long life and be happy with his family. However, the family’s neighbors had other plans.

“The neighbors would leave food out for him, they had decided they didnt want a pit breed next door to them so they put antifreeze, which is coolant for your car, in his dog food,” Bredson said. “They had also found traces of aluminum in his system as well. He ended up being poisoned and passed away the next morning.”

Miller, who works at a vets office says that they can always tell who really takes care of their pets and who doesn’t, and has seen cases of animals being abused in her time working there, and throughout her life as a whole.

“I remember this time when I was in middle school, this family was moving out of their house and they had always had an outside dog in the very back corner on this little lead,” Miller said. ”Everytime I would go over there I would try to play with her as much as possible. I felt so bad for the dog. One day they upped and moved and left the dog. We took matters into our own hands and went to go get the dog. We had to cut the collar off of her because it was so tight. The foster company we were working with at the time, F.O.R, took in her and got her adopted.”

Miller has also had multiple cats and dogs that came through her job that needed surgery because of attacks from other animals.

“That is always really sad to watch because those animals are always the sweetest. Also most animals when they come into the vet are not themselves. They are usually pretty nervous and scared,” Miller said. “I always have to keep this in mind when they are acting like that because those are the ones who will snap. I have been bit several times due to animals being scared, but at the end of the day there is a difference between an animal being vicious and them being scared.”

While the owners are devastated by the loss of their dogg, they are not pressing charges against their neighbors. The case is one that not many lawyers would pick up, as it would be a civil case.

”I do believe their should be harsher punishment for animal cruelty. These people take away owner’s best friends and what could be their saving grace, all because of their personal beliefs or feelings,” Bredson said. ”Cash did not ever show aggression towards the neighbor. They simply poisoned him because of the name of his breed. A pit.”

Miller also believes that there should be a harsher punishment for animal cruelty, because she sees that people continue to treat their pets or other people’s pets badly with no repercussions.

“It is very heartbreaking to know that people even think about those things. Especially to a puppy. He was only six months old,” Miller said. “Things like make me very mad because nothing ever gets done to those people and they just get to continue on with their lives even though they are a murder. I will never understand what runs through their minds when they see the dog’s sweet face and think of the worst thing they can do to them. Those people in my book deserve the worst luck in life and deserve nothing good. I have no respect for someone who is going to hurt something so sweet that can’t even defend themselves back.”