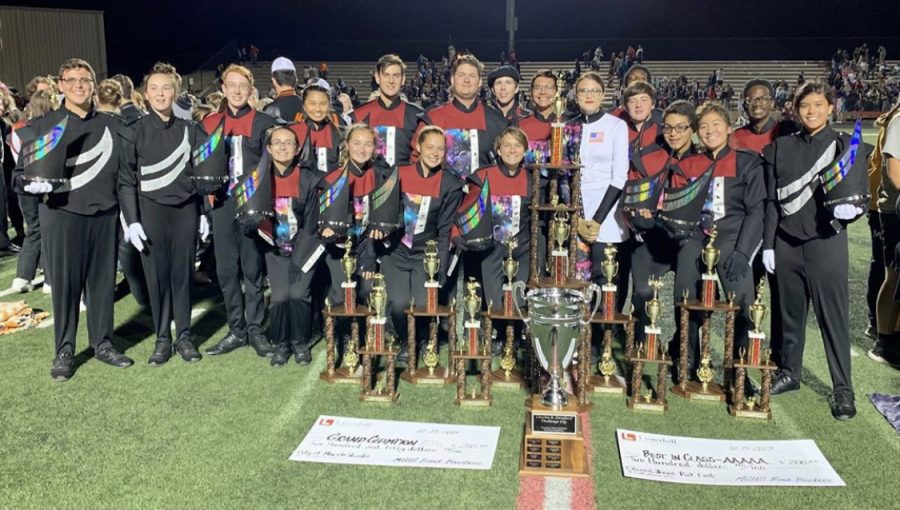 The band poses with their array of trophies after the Tennessee Valley Marching Band Competition. The band took home the Grand Champion trophy.

Even though actors Zendaya and Zac Efron were not there, the band show was still a show-stopper. With their performance entitled “To Rewrite the Stars”, they surprised viewers.

After last year’s more than successful marching season, the band directors David Raney, Robbie Stout and Jack Albert knew they wanted to have the same outcome this season. While the name can be misleading, the show is actually in celebration of the 50th anniversary of the NASA

“The show is not really about space, it’s about the scientist and triumphs and struggles to get to space,” Raney said.

At the time of designing the show, all the band directors had was general concept. Knowing that other bands in the area had that same idea, they strived to find a different perspective. This led to them designing something different from other bands in Madison County.

With a broad idea, band directors had to make many connections to many people to see the full idea come together. They also had to get parents on board with the idea to ensure all the things could be carried out.

“The picture that are seen on the back drops actually came from NASA,” Raney said. “They gave us access to some of their files and there we found the pictures that we felt best represented the story we wanted to tell in the show.”

However, the backdrops are not the only things seen in the show that have thorough thought put into it. The uniforms worn by the color guard feature a lab coat on one side, and the depiction of a galaxy on the other. They also sport a pair of glasses to give the playful appearance of them being scientists. Viewers can also see flats along the front of the field, which are decorated as blueprints. Other things such as flag designs and drill writing were things that went well with the show and tied everything together.

While most would view the show thinking it came together easily, the band ran into many problems throughout the short competition season.

“The backdrops seen in the program were not originally the idea. They were the backup idea” Raney said. “While the original idea was good, it would have cost too much money to see it happen, and was also too intricate.”

However, even with the backup idea, it was still one that proved to have it’s own set of difficulties. Some of the backdrop had strings that were pulled to make another fall over it. Directors and parents found it difficult to find a way to ensure they would come down. Also, because the props did not come in until late into the season, students did not get much practice cuing the prop, and parents had a short amount of time to find the best way to construct them.

The band was also met with the problem of not having all the drill needed to perform the show until close to the first competition, because of this, Raney did the best he could to ensure the students knew every part of the show the best they could. Even with all the setbacks the band faced, they still prevailed and went on to have another successful season.

“In my opinion, the competition season was very successful,” senior Jamie Douglas said. “We definitely had our ups and downs, but we got a lot done in some extreme conditions.”

Seniors such as Douglas, felt that the show was one that will always be remembered by those who who performed in it and for those who watched. Putting in countless hours during camps, practices and class time, Douglas knows that everyone gave everything they could to the show. Knowing that in the end every performance was the best, everyone was proud of what the band accomplished. Placing first at the competition held in Muscle Shoals and second at the state championships in Hoover, the band knew they had a more than successful season. The band also made the trip to Atlanta, Georgia for BOA Regionals, where they made finals which was cancelled due to rain.

“Even though I was happy to be out of the cold downpour, I was genuinely sad that finals got canceled,” Douglas said. “Many band members, including myself, wanted a chance to redeem ourselves from our earlier performance. We knew we could have done better with a second performance later in the night.”

Raney himself also feels the band would have had a better run later in the day, as he feels the band performs better later at night rather than early in the morning. However, he still feels that the band did an excellent job even with the wet conditions.

Bringing home over 10 trophies and even two checks to go towards things needed in the program, the band finished out a season. With the season over, the band turns its focus to it’s indoor season. With the guard and percussion getting ready for the winter competition season and the band getting ready for their concert season, the group expects that more trophies will be entering the band room in the coming months.

“We hope to come up with another great show for next year that parents, students and spectators will enjoy,” Raney said. “We have a great group of students who we know will continue to work hard and make this band program even better than the way they found it.”