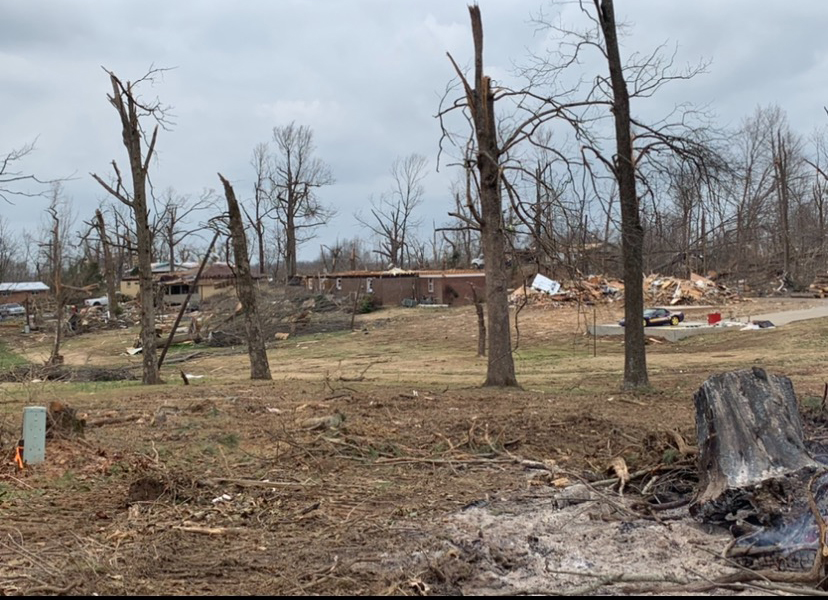 The November tornado outbreak did significant damage to areas of Kentucky.

Sophomore Travels to Kentucky to Help in Tornado Recovery

Seeing the destruction of the tornado on Dec. 10, 2021, only caused sophomore Jay Hunt to to help tornado survivors in Mayfield, Kentucky.

On Dec. 26, Hunt made the decision alongside his father and 20 to 30 members from his church to pack up when they were given the opportunity to make a change in Mayfield. They stayed and helped for four days, beginning early Sunday morning, and arriving back home late Wednesday night.

“We thought that it would be a great way to serve a community in need, and it would be a great way to spread God’s word. I actually never knew how severe it was until a couple of days before I went when I heard that it was an F4 tornado. When I found out how severe the tornado was, I was looking forward to going to help those who needed it,” Hunt said.

The first act of service Hunt took part in along with other volunteers when he arrived was unloading moving vans. They were filled with items varying from cleaning supplies, hygiene products and diapers.

Despite the workload and the amount of time each task took, Hunt committed himself to help those who could not help themselves. The first few service projects that he completed were in the community and provided a safer and cleaner environment for the residents.

“I started with clearing a lot behind a business that the owner was opening up for people to pull in their campers if they didn’t have a place to live in the meantime. The next service project we did was help clear the debris and trash on someone’s property where their house got completely destroyed. By doing this, we were able to shorten the amount of time it would take for the couple to get back to living their normal life again,” Hunt said. “We also would unload more trucks filled with supplies to help further supply people struck by the tornado. The last service that I helped with was interviewing people to make sure that they were eligible to be supplied with items.””

Each day the Tornado Relief team spent close to 14 hours helping in several different ways. Even with the high number of hours and the amount of work they carried out, Hunt still feels there was still a sizable amount of work that still could have been done.

“I feel that for the days that we were there, it was a lot of work and I feel that we did well. However, it was nowhere close to being enough work to supply the whole community,” Hunt said. “Seeing the destruction firsthand was crazy to see. When I first saw it, I was just speechless. I have never seen destruction like that before in my life.”

“I did meet several people while I was there. Most of them were adults, but I met a couple of people that were in middle school and high school. I was impacted by their work by seeing how they would get up early every morning and stay at that church until late that afternoon,” Hunt said. “After only two days of working there, I was exhausted. But knowing that the men and women who lived there were doing the same thing I was doing every day for weeks upon weeks was very impactful.”

The more and more time Hunt spent serving others, the more he realized how much just he and his church being there truly meant to the people in Kentucky. Motivated by their encouragement and appreciation, Hunt continued to serve and support the team and the people of Mayfeild.

“The people that we were serving were very grateful and appreciative for what we were doing. Seeing the people’s reactions to us helping them made me want to keep doing what I was doing. I didn’t want to leave Mayfield when the time actually came. I wanted to stay up there longer and keep helping the people up there,” Hunt said.

Getting the opportunity to experience life events such as this, gave Hunt the realization of how important the people and the things he has in his life really are to him. Taking things for granted is one of the problems he sees society doing on a daily basis without truly understanding how blessed they actually are.

“I learned not to take things for granted and be grateful for the small things that I have like electricity, a reliable water source and basic appliances around the house because you’re not promised to have them tomorrow,” Hunt said. “There are so many more people who do not have what we have. Instead of complaining about what we don’t have, we must be grateful for what we do.”