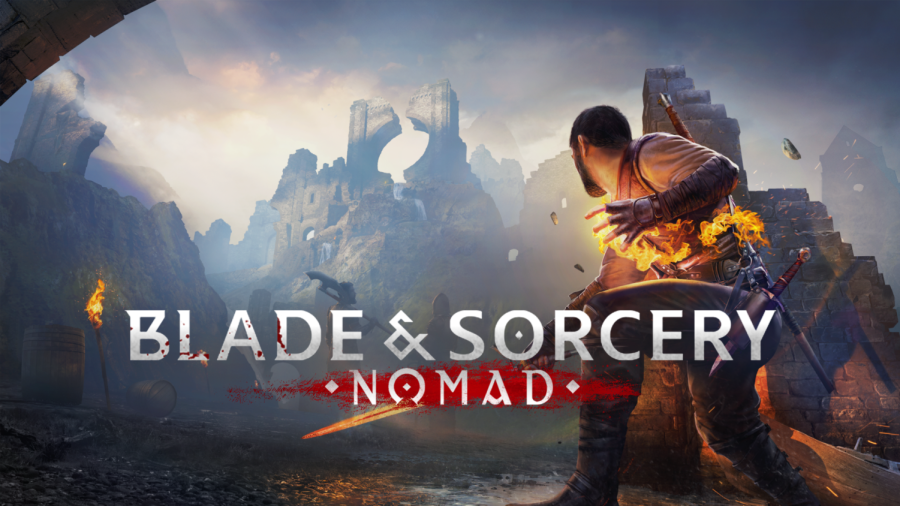 Would you ever imagine yourself in the middle of a battle arena, sword in your hand? Well maybe not in real life, but that could change with an awesome piece of tech and a single game. Older times of fighting and conflict come to life through the Oculus Quest 2 in Blade and Sorcery: Nomad!

Think of this: you just left the comfort of your house with a rack of weapons and a fire within the fireplace. You have started to make your way over to a strange structice, known to be a dungeon controlled by enemies of the area. It is your job to go through it, defeat enemies that go against you with various weapons, and escape alive. For some, it would be a dream come true with fun exploration and combat, with the two seeming to never end.

I have had Blade and Sorcery Nomad for a few months now, and I can say that it is an excellent game made by Warpfrog, exclusively for the Oculus Quest 2 virtual reality headset, only for $20. I wish I found this game earlier when I first bought the headset, with the amount of fun that I have had with my time of owning it.

Blade and Sorcery Nomad revolves mainly around combat, as if it was centuries ago, with medieval based weapons available for you to use. They range from swords, to hammers, and even mythical staffs for enhancing magical abilities used by the player. In order to play the game, you will have to get used to using almost only melee to get through your journey! But if you crave more ranged type combat, a bow is available for striking opponents from afar.

Now as the game’s title shows, sorcery is also at your side with three powerful but cool spells at your disposal. Each has their own unique abilities and can even be used in more ways than one. The first is the fire spell, which has a few uses to it.

Its primary use is to create throwable fireballs, which can be useful for nailing far away opponents. It took me a while to realize this, but you can even control the fireball, making it that much more useful. Its last use is igniting weapons with fire, which can be used to pierce through stone, allowing you to climb up a wall using two ignited swords, or ignore the defense of an opponent’s armor!

The next is the electricity spell. Even though it only has one use, it can still be very useful in a fight. When formed, nearby objects and opponents will be electrocuted, disabling their mobility and will eventually lead to their demise. Just in case you are in a pickle, this could easily be the savior of your run. Like the fire spell, you can charge your weapon with electricity, dealing extra damage and electrocuting an enemy from nearby.

The final available spell is the gravity spell, which also has two uses for it. Its primary use with one hand is to drive back enemies or objects with a gravity push or pull, maybe because someone is getting too close to you with a sword in hand. It also removes all gravity from a charged weapon, giving you an advantage to toss your weapon as a ranged weapon. But when you combine a gravity spell with both hands, an anti gravity field is created, granting extra mobility and an advantage towards a now floating enemy!

The fighting and conflict begins on the big map on the wall in your humble abode. There, you can select a few locations where you can battle opponents in a sandbox environment! The area and favorite area to do so in would be at the canyon. This is because you are fighting below a river, demanding you to be more careful despite being on wide bridges. There are also multiple ziplines for you to glide down or climb. But the area below still gives you an advantage because an enemy blocking could cause them to fall.

Combat in the game is one of the best that I have ever seen in a VR game, with it being pretty realistic with how the AI enemies behave. Each will have a random weapon in hand, based on their class. AN example being mages will usually have a staff and an empty hand to cast spells in, and thieves will be seen with two daggers in hand and the element of surprise at their side.

Realism comes in with movements made by enemies. When attacking, the opponent can block and dodge attacks by jumping back, or shielding with their weapon or shield. This gives a good amount of difficulty with every swing of a sword is not guaranteed to hit the enemy. Even their ways of attacking are varied as well. Sometimes they will just do a basic swing, and maybe even go for the legs for reduced mobility. This is why I like the game so much, because it is not basic swing and hit. There is a strategy to combat and dangers in every attack!

Now what I like about the game the most is what you can do yourself in the game. This comes to using your hands often to fight. In most games, climbing can be limited to only certain spots, that are usually a cutscene-type effect. But in Blade and Sorcery Nomad, there are no limits or restrictions with climbing! You can just go up to a way with a good gripping point and use both of your hands manually to climb in any direction! This can be used to scale up walls, go down ropes, and even sneak past enemies, or deliver a surprise attack towards them. I would have to say that this is my favorite feature in the game.

With an age rating for the game, I would have to give it a T rating due to a few factors that affect everyday gameplay. As said earlier, the game is obviously surrounded by combat and fighting, making it centered around violence with fighting and killing opponents. The other thing is the slight blood that can be seen when attacking an opponent with any weapon, along with dismemberment with certain sharp weapons. However, both can be disabled in the settings for slightly younger audiences to play. Even so, my experience with the two haven’t been that bad, with the blood not looking realistic at all, and is usually a temporary effect.

Overall, Blade and Sorcery: Nomad can be said to be my favorite game on Quest 2 throughout the other games I own. I never thought I would be able to fight in medieval times in seemingly real life, but thanks to the Quest 2, I can now just put it on and become a gladiator to face lots of enemies and challenges. I would suggest this game to be a first game for new Quest users, seeing that it is not too advanced and is just close to simple combat. If you have an extra 20 dollars somewhere in your house, maybe you should check it out, but try not to go too crazy.