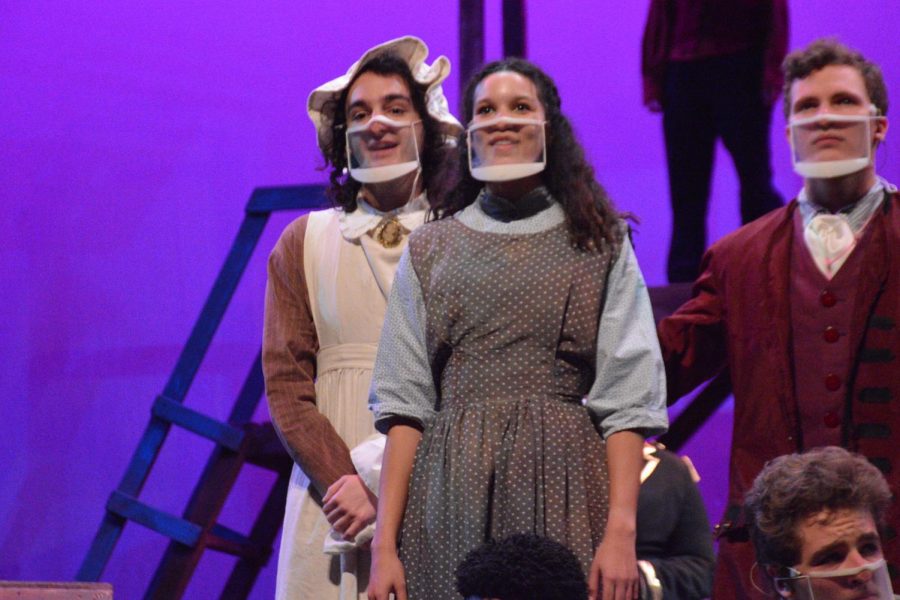 Hannah Mae Burnette projects her voice through her mask to say to the audience “she’s a girl.”

Performing a show with five Tony awards, the theatre department had a lot to live up to with “Peter and The Star Catcher.” And, as always, they went above and beyond with the show.

A prequel to Disney’s classic “Peter Pan,” the show itself was very quick-witted and absolutely hilarious.The performance was carried out amazingly, and you can tell how much detail was clearly put into every aspect of it. The set was absolutely gorgeous, and the story was wonderfully carried out.

There was hardly a moment during the entire show where I did not find myself laughing, and the serious moments had me near tears. The ending was something I didn’t expect, a twist on the normal “love story” plot. The main characters were lovable and their emotions could be felt throughout the audience, no matter what the emotion was. Whether it was fear, wonder or even bitterness, the actors portrayed it so well that I could feel it too, allowing me to relate to the characters on a variety of levels.

Overall, I am not surprised. The theatre department has never failed to put on amazing performances, and I doubt that anyone would not fall in love with this show just as quickly as I did. Hannah-Mae Burnette (Molly), Matt Brown (Black Stache) and Michael Nelson (Peter) were perfectly cast in their roles. They brought Peter Pan’s story to life in a way that most have never seen before.

They made the audience believe in magic, and I mean really and truly believe it, even if it was only for two hours. They, and all of the other amazing cast members, put on a captivating and hilarious show, and I would pay to watch them put on every show they put on in the future.