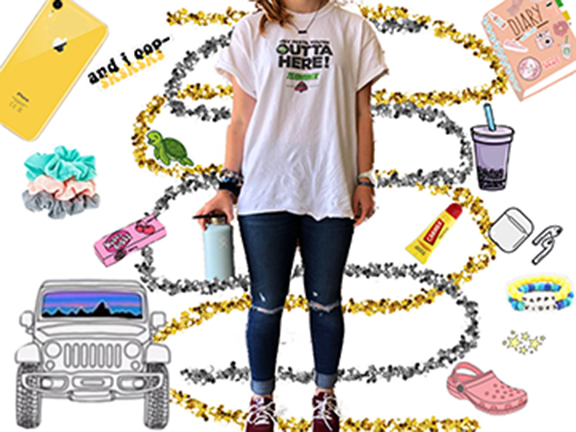 There’s the “Facebook mom”, the “YouTuber”, “Pinterest Queens” and “Instagram Influencers”, but now, a new social media character has come into the game, and she will rule us all: The VSCO[1] Girl.

The VSCO Girl has recently become a viral meme.[2] She carries around a HydroFlask[3] either decorated with stickers or some painting. She’s obsessed with anklets, colorful friendship bracelets, and Kendra Scott necklaces[4]. She wears scrunchies[5], Teleties[6], and EXTRA large T-shirts when she’s obviously a small just so it will cover her shorts. Her shoewear is limited to birks[7], crocs(with the Jibbitz[8]), Chacos, slide-on Vans, and Air Force One’s[9], She has to have a VSCO Room™ equipped with Polaroid[10] picture collages hung on ~aesthetically~[11] pleasing lights, fluffy pillows, tapestries, and a hammock chair so she and her VSCO Girlfriends™ can make TikTok videos[12]. A VSCO Girl also has to have her iced coffee from Dunkin’ Donuts with a sprinkle donut around the straw, or her Pinkity Drinkity[13] daily, as that is her main source of energy.

On a VSCO Girl’s VSCO account you will see her publish screenshots of cute texts and Snapchats from her VSCO Boyfriend™ who will break up with her in two weeks. After their breakup she may republish quotes talking about how fun it is to be single and the #singlelife or a republish chain[14] saying “republish in .000025 seconds to get a boyfriend”. A VSCO Girl will also publish and republish inspirational quotes, beach pictures, bible verses, travel pictures, sunsets, neon signs, spirit week at school, DSCOs[15] of people at parties and hanging out, screenshots of popular tweets and TV shows, and ~aesthetic~ memes. Her VSCO personality translates into her other social medias as well. You can spot a VSCO Girl on Snapchat by the filters she uses(Coconut Creme, Beach Vibe, HAPPY VIBE, and Star Freckles). A VSCO Girl’s Instagram pictures always has a grey or blue tint to them. A VSCO Girl’s Facebook… wait a minute, a VSCO Girl doesn’t use Facebook. She may have an unhealthy obsession with Facetune[16] because she always has to look like a model. Her photos are always edited with C1, M5 or F2[17]and Grain[18] because they need just a ~pop~ of color.

We make fun of VSCO Girls’ loud Hydroflasksksksksks[1], but we all want one. We laugh at their “Chick Juice”[2], but we can’t go through one week without it either. We say they look stupid with their oversized shirts, but we envy their style. We poke fun at them for editing their pictures, but who do we ask to edit ours because we know it can can look better? So, deep down, aren’t we all VSCO Girls? Or at least secretly wish we were?

[1] A noise we make fun of VSCO Girls for making

[2] A joke everyone.usually teenagers, on a social media knows about

[9] A large, clunky shoe, usually coming in white, not to be confused with the President’s airplane

[11] The squigglies are something VSCO Girls use for emphasis

[16] Basically photoshop on your phone

[18] An editing tool on VSCO that makes pictures look grainy